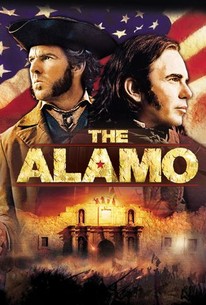 Critics Consensus: Too conventional and uninvolving to be memorable.

Critics Consensus: Too conventional and uninvolving to be memorable.

Critic Consensus: Too conventional and uninvolving to be memorable.

The roads cross at San Antonio de Bexar at a small, ruined mission called The Alamo--a place where myth meets history and legend meets reality. In the spring of 1836 nearly 200 Texans--men of all races who believed in the future of Texas--held the fort for thirteen days under siege by General Antonio Lopez de Santa Anna, ruler of Mexico and commander of its forces. Led by three men--the young, brash Colonel William Travis; the violent, passionate James Bowie; and the larger-than-life living legend Davy Crockett--the Texans and their deeds at the Alamo would pass into history as General Sam Houston's rallying cry for Texas independence. As well, their actions would become legend for their symbolic significance.

Richard Nance
as Grey No. 1

Jett Garner
as Grey No. 2

Matt O'Leary
as Boy in Store

Francisco Philibert
as General Cos

Tim Mateer
as Bill the Rider

Michael Clossin
as Tennessean No. 1

News & Interviews for The Alamo

View All The Alamo News

Critic Reviews for The Alamo

In spite of two great performances, this is a muddled affair.

Sluggish, talky and unfocused, its downbeat revisionism robbing its historical figures of the iconic status that would have made their story worth retelling.

Arriving in theaters today, the resulting $100-million dollar motion picture is a flawed, sprawling examination of the Mexican-American conflict that raises far more questions than it answers.

It's dull, talky, and sometimes maudlin.

A big, lumbering, unwieldy epic that creaks and groans from speech to battle.

Something was missing from the film. It lacked punch.

This dog of a movie confirms that in 1836 Texas was stolen from Mexico by a bunch of opportunistic bastards whose descendants went on to use similarly underhanded methods to steal the office of the White House in 2000.

There are great moments, though it's ultimately a lightweight film and certainly not an Oscar contender.

Audience Reviews for The Alamo

A good historical film, but I've seen better. Quaid has one of his best performances (in my opinion), but that's not saying much. Thornton was good. Jason Patric and Patrick Wilson were m'eh.

The Alamo was just not a good film. I did not like the acting, it was overdone and there's too much talking going on. The film tried to portray some men as heroes when, for example, the character Jim Bowie just seemed like a drunkard, slave-owning bastard (maybe America tries to portray him as a hero when in my perception he's not?. It's just not an interesting film.

The Alamo is the perfect example of a film that really good, but has gotten so much bad press because it was a box office bomb. The Alamo is a very underrated film that is an interesting history lesson as well as an entertaining film. Yes, it's a period piece, and it doesn't have exciting, thrilling explosion. But the film is nonetheless an accomplished piece of work with a good enough cast to keep the viewer interested. I would recommend this film to people interested in history, and those interested in the Battle of the Alamo. There's a pretty good cast at hand here, and the film is one of those films that shouldn't be dismissed. The battle scenes are impressive, and will appeal to history buffs for sure. I think it's always impressive to see real events recreated and I thought that John Lee Hancock created a worthwhile historical film that will definitely appeal to history buffs. The Alamo shouldn't be regarded as a bad film. Just because the film bombed, doesn't mean films suck. There are tons of great films that have failed at the box office. If you're interested in the subject, then I recommend watching this film. But to the others expecting a solid action film, you will be sadly disappointed. A must see film for the history buff.