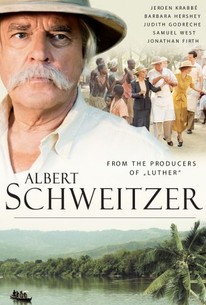 Albert Schweitzer is a biopic based on the life of the eponymous philosopher, doctor and missionary, who was awarded a Nobel Peace Prize for his various humanitarian services. With the Cold War heating up, Schweitzer (Jeroen Krabbe) is encouraged by his friend Albert Einstein to speak out against the usage of the atomic bomb, which draws the ire of the American government. After the CIA moves to ruin Schweitzer, which puts his hospital in Gabon in jeopardy, forcing the accomplished physician to make a decision as to whether or not his career is worth publicly stating his beliefs. The film co-stars Barbara Hershey as Helena Schweitzer, and is directed by Gavin Millar (Dreamchild).

There are no critic reviews yet for Albert Schweitzer. Keep checking Rotten Tomatoes for updates!

There are no featured reviews for Albert Schweitzer at this time.