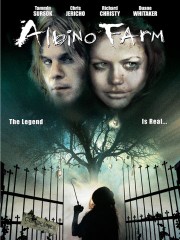 I like how the meaing of what the Albino Farm was, was left as a mystery until the very end.

Not bad, not great.

Christopher S
December 22, 2009
ALbino Farm had an intersting location. Not too many horror films are set in rural Missouri. I would love to see horror film set at the Lemp Manison in St Louis Mo but to my knowledge it hasn't been doen yet. It also was cool that it is based on actual legends dating as far back as the Civil War South.
A good supernatural horror set in Civil War times is Dead Birds.

Roxsy T
December 22, 2009
I was originally curious about this movie when I met one of the directors of this film along with Chris Jericho and Richard Christy at Fangoria. If it wasn't for them I might not have bothered with it at all. I'm glad I got to see it but this isn't something I see myself watching again. The story isn't original and there were a few scenes in it that particularly pissed me off. There are a few scenes where just everything is dark. In some of these scenes you can make out what you're seeing but in others it seemed they were trying to either use natural light or just didn't get the lighting right at all. Not being able to make out what I was seeing isn't entertaining. The death scenes were weak aswell. This movie was okay. Just okay. I personally didn't think it was horrible I just think it could have been a lot better. It had this sense that it could have been one of those horror flicks that are fun to watch like Devil's Rejects but it didn't make it to that grade. There are parts that really slow the movie down like the college students screaming and joking with each other. I can tell it was meant to be funny but it ended up being quite boring. Some parts were over-acted but in other parts I thought the actors playing the college students were quite good. Other than the "in the dark" sequences I liked some of the out doorsy directions the directors took. Albino Farm is okay. Like I said, it wasn't original but in this day and age I really don't expect any film to be original anymore so then it only becomes a matter of did it entertain me or not? This film entertained just fine. It has a creepiness about it that kept me watching.

Elina R
October 31, 2009
I rented this movie to see some albinis. Movie did not deliver.

Carl N
October 27, 2009
To say that this film is un-original would be the understatement of the year. It is obvious from the very first frame of this what is going to happen. You can pick the characters that are going to die. Which character is going to survive And most importantly of all which character is going to show her breasts. Ok you can say that about 90% of horror films but it would have been nice to have a surprise or two. Sadly this is unashamed cash in on films like Wrong Turn and Hills have eyes. Only nowhere near as good. And that should tell you something. Chris Jericho of WWE wrestling fame is the only big name in this. I am very surprised he was in it because it?s such a pile of garbage. Don't waste your time.

Jason D
½ October 23, 2009
Albino Farm takes place deep in the Ozark Mountains as 4 college students (who have clearly NEVER seen a horror film in their lives) venture through said backwoods, have car trouble, become curious of an old legend, run into a bevy of very weird inbred hillbilly townsfolk, go deeper into the backwoods, then run into severely mutated monster hillbillies and die. Yep, Albino Farm doesn't offer a whole lot of new concepts. Some familiar faces may include lead girl Tammin Sursok (TV Soap Opera Vixen), WWF wrestler Chris Jericho, Duane Whitaker (Pulp Fiction, Feast), Nick Richey (loud, obnxious guy in Welcome to the Jungle who plays loud, obnoxious guy in Albino Farm. Way to stretch those acting chops, Nick), Kevin Spirtas (Friday the 13th VII, Subspecies franchise), Richard Christy (drummer for several popular death metal bands as well as frequenter on the Howard Stern show), and the beautiful Bianca Barnett (though not so beautiful in this since she plays the lead mutant). In fact, the only reason I wanted to see this movie was for Bianca, since she lived in Garland, TX and went to the same elementary school as I did. I remember thinking she was incredibly hot and wanted to see her naked. I guess I finally got my wish...save for her monster face. Other than that, there are some pleasantly brutal and gory scenes in the film. The story, as I've already said, is horribly unoriginal (though there are tiny sprinkles of originality...very tiny), and the acting is beyond atrocious (though this film does have a unique but bizarre cast). Yes, Albino Farm is nothing to call home about, but I've definitely seen worse.

John S
October 2, 2009
It's a super-low budget horror movie that I only knew existed because Chris Jericho was in it, so detailing its shittiness hardly seems necessary.

Jason S
September 25, 2009
Read up on the old urban legends about this, before seeing it and while it didn't follow the legend, at all, it was still an enjoyable horror flick! Had decent special effects and makeup. A little too long to get to the farm and the main story, but worth a view if you have time to kill.

Kris L
September 23, 2009
This movie had some terrible acting, a bad story, and no redeeming qualities to speak of. At least I was able to guess the sole survivor of the group.

Anthony B
September 22, 2009
This low budget horror doesn't contribute anything new to the genre and the acting is pretty horrid, but on the flipside it does star WWE superstar Chris Jericho as a retarded redneck and with a title like "Albino Farm" how can you resist not giving it a try!

Phil F
September 20, 2009
Four students set off to rural America for a school project. These students soon find themselves in more trouble than they can handle when they decide to check out the legend of Albino Farm.

Albino Farm is a very well done horror movie, in parts that is. There is just enough character development to keep you interested in the characters. The score is right one the money, the acting isn't bad and the special make-up effects are very well done.

What's wrong with this movie? Why only give it a 60% if it had all those things going for it. Well... This movie could have been called "Wrong Turn 2.5" Seriously. It follows the same storyline pretty much, A bunch of kids find themselves mixing with inbred, mutated killers. The originality is ZERO.

Other than that, what could have been a realistic type horror movie turned out to be laughable toward the end. Propane tanks??? In a cave??? Yeah..

Anyway, it is worth watching for a rental price. That is about all.

Ebony W
September 17, 2009
Not half bad. Yes it is the same old story, but it was executed decently. Definitely seen worse.

Donna L
½ September 15, 2009
I've seen a lot of bad reviews on this but I didn't mind it at all. I really liked the blond girl's acting. When she's crying and scared, her nose is even stuffed up heheh.

James H
½ September 13, 2009
There is nothing about this movie that is original, It's the same old kids getting terrorized. You have seen it all before many times and it is getting very tiresome. The acting is decent but no one is particularly good.

Nathan N
August 12, 2009
I watched "Albino Farm" for two reasons: becasue I was at work and because it boasts the one and only Chris Jericho as its lead. Unfortunatly, I can't suggest this be watched for any other reason than to maybe ward off boredom. Maybe. It certainly isn't good but it isn't awful either. Also, and most unfortunaly of all, there isn't much Jericho to be seen. He shows up, has charisma and makes you wish he WAS the lead. There is no reason to see this movie.
Page 3 of 4