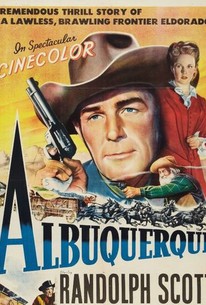 Randolph Scott puts in time with Paramount's Pine-Thomas unit in the big-budget western Albuquerque. Scott is cast as Cole Armin, the nephew of tyrannical town boss John Armin (George Cleveland). Defying his grasping uncle, Cole sides with a small wagon-train line which the elder Armin hopes to drive out business. In his spare time, he is wooed by local lovelies Letty Tyler (Barbara Britton) and Celia Wallace (Catherine Craig). Taking a break from his B-western duties, Russell Hayden plays Cole Armin's best buddy, while Lon Chaney Jr. does his usual as John Armin's chief henchman. Albuquerque was based on a novel by the prolific Luke Short.

This big-budget Western fails to hit paydirt, but benefits from Randolph Scott in the lead role.

There are no featured audience reviews yet. Click the link below to see what others say about Albuquerque!