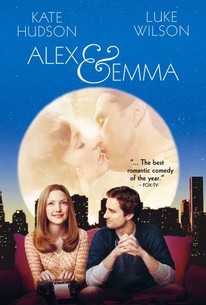 Critics Consensus: A dull and unfunny comedy where the leads fail to generate any sparks.

Critics Consensus: A dull and unfunny comedy where the leads fail to generate any sparks.

Critic Consensus: A dull and unfunny comedy where the leads fail to generate any sparks.

Rob Reiner directs Luke Wilson and Kate Hudson in Alex & Emma, a romantic comedy about an author and his secretary. Gangsters will kill Alex (Wilson) in 30 days if he doesn't pay back his gambling debts. The only way he can do that is to finish his new novel. He hires sassy court stenographer Emma (Hudson) to transcribe his dictation. The film intercuts between the two of them writing the story, and the story within the story. Hudson plays three roles in the film, and Wilson plays two. Sophie Marceau and David Paymer round out the cast. The premise is (very) loosely based on a series of events that befell Russian novelist Fyodor Dostoyevsky. ~ Perry Seibert, Rovi

Lobo Sebastian
as Bobby/Flamenco Dancer No. 1

Chino XL
as Tony/Flamenco Dancer No. 2

Jordi Caballero
as Flamenco Dancer No. 3

The actors make this fun if you can overlook the ludicrous view of Jeremy Leven's screenplay concerning how novels are written and what publishers generally pay for them.

Uninspired -- neither romantic nor comic.

A miserable failure on every count.

Alex & Emma is the kind of Hollywood formula romance that announces where it's going in its first moments.

It has no tempo, energy or pulse.

This isn't one for the time capsule -- just bury it.

About as funny as root canal work and as romantic as a rainy fortnight in Wrexham. Rob Reiner should make a phone call to Christopher Guest a priority.

"Alex & Emma" has a light tone of modernized '20s inflected comedy that Woody Allen would love to still be able to capture in his movies.

No matter how hard Alex and Emma tries, it's still the same package but with new wrapping.

What might have looked like a good idea on paper goes seriously awry in the screen treatment of this clunker from writer Jeremy Leven and director Rob Reiner.

Ultimately, the most interesting thing about the film is that it was based on a true incident in author Fyodor Dostoevsky's life.

Why is it when the studios make romantic comedies they turn out to be really bad? Predictable and boring.

Really cute story in a story.