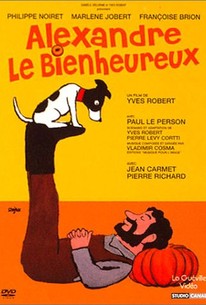 This amiable French comedy stars Philipe Noiret as Alexander, an shiftless farmer who prefers sleep to work. After his nagging wife dies, Alexander becomes even lazier. The farmer becomes entranced by a beautiful young woman, and proposes marriage. But when his prospective wife gives evidence of being just as domineering as wife number one, Alexander balks at the altar and retreats to his previous life of ease. Originally titled Alexandre Le Bienhereaux, Very Happy Alexander was directed by Yves Robert, best known for his international success The Tall Blond Man with the One Black Shoe. ~ Hal Erickson, Rovi

There are no critic reviews yet for Alexandre le bienheureux (Very Happy Alexander). Keep checking Rotten Tomatoes for updates!

There are no featured reviews for Alexandre le bienheureux (Very Happy Alexander) at this time.