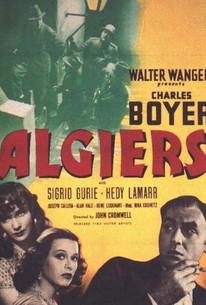 This Hollywood remake of the French Pepe le Moko adheres so slavishly to its source that it utilizes stock footage from the original film, and even picked its actors on the basis of their resemblance to the French cast. Contrary to legend, star Charles Boyer never says "Come wizz me to zee Casbah"; as master criminal Pepe le Moko, he's already in the Casbah, a crook-controlled safe harbor which protects Pepe from the French authorities. Pepe's friendly enemy, police inspector Joseph Calleia, treats his pursuit of Pepe like a chess game, patiently waiting for his opponent to make that one wrong move. The ever-careful Pepe has the misfortune to fall hopelessly in love with tourist Hedy Lamarr (in her first American film). A combination of events, including the betrayal of Pepe by his castaway lover Sigrid Gurie and Hedy's tearful return to her ship when she is misinformed that Pepe is killed, lures the hero/villain into the open. Arrested by Calleia, Pepe begs for one last glance at his departing sweetheart. At this point in the French version, Pepe cheated the hangman by killing himself; this would never do in Production Code-dominated Hollywood, so Algiers contrives to have Pepe shot while trying to escape. Algiers was remade in 1948 as a musical, Casbah, starring Tony Martin.

Gino Corrado
as Detective
View All

never gets over its artificiality, emptiness or lack of suspense.

The dialogue is silly (and campy), but the film is nicely produced and Hedy Lamarr is goregous in the movie that made her an international star.

The American remake of Pepe Le Moko is practically a shot for shot, line for line copy, except for a few "make it clearer for the Murricans" changes that are small. Hedy Lamarr is smouldering, and Boyer is all charm, but still the original French version is slightly better, so see that one first.

"Algiers," starring Charles Boyer, was not nominated for Best Picture in 1938, but it received several major nominations and was one of the big films of that year. It was nominated for Best Actor, Supporting Actor, and Cinematography, among other things, but went home empty-handed. Although I cannot give it more than a 7 rating, I was impressed with the grown-up quality of "Algiers." Whereas other films that year were rather juvenile and went out of their way to appeal to the masses, "Algiers" was dark and mature, presenting a rather cynical view of life. Although (unfairly) forgotten today, "Algiers" in large part inspired 1942's "Casablanca," and I suspect that it helped Roman Polanski conceive "Chinatown." The Oscar-nominated Boyer plays a French criminal mastermind, Pepe, hiding out in the labyrinthine Casbah section of Algiers. The police attempt to apprehend him, but the police force is shot through with so much corruption that it isn't too difficult for a wily criminal to elude their grasp. But enter love. Hedy Lamarr plays Gaby, a woman vacationing in Algiers with a rich businessman to whom she is engaged but with whom she is not in love. When Gaby and Pepe meet, sparks fly. I won't reveal the dark ending, but let's just say that love and criminal plotting don't mix. "Algiers" is not a great film, but it has some very special elements. If it had been edited better and directed with a bit more force, it could have rivalled "Casablanca." Especially noteworthy is the dark, brooding cinematography which might have inspired Orson Welles, who at this time was beginning to dream up his landmark film "Citizen Kane." "Algiers" should be thought of as one of the early examples of film noir.

Not as good as Casablanca but still entertaining, Hedy Lamarr is fantastically beautiful almost otherworldly and plays her part well with a sort of wounded sadness.

I probably would have enjoyed it more had I seen a cleaner copy. Unfortunatley I don't think that this film was ever restored.