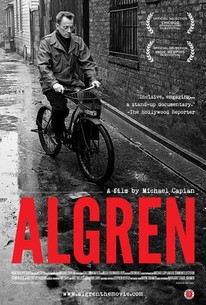 Exploding onto the national literary scene in 1950 after winning the first-ever National Book Award for "The Man with the Golden Arm," Nelson Algren defined post-World War II American urban fiction with his gritty, brilliant depiction of Chicago and its working class. From Ernest Hemingway to Kurt Vonnegut, Frank Sinatra to Simone de Beauvoir, Algren influenced an entire creative class with his groundbreaking work. Featuring never-before-seen archival footage, newly uncovered audio recordings and his own rarely seen personal photo collages, ALGREN charts the rise and fall of a man whose transgressions, compassion and thirst for justice pushed him to become a tireless champion of America's underclass and one of the 20th century's most consequential literary voices.

Billy Corgan
as Self

Andrew Davis
as Self

Denise DeClue
as Self

William Friedkin
as Self

Barry Gifford
as Self

Rick Kogan
as Self

Wayne Kramer
as Self

John Sayles
as Self
View All

Algren will serve well as an introduction to the man and his legacy to newcomers.

Dig in, it's the real Chicago.

Using a unique cinema palette, there is a magic to Algren's life story that can't seem to exist in lives today & this doc captures it in all its powerful glory and heartache.

Caplan does an excellent job telling the narrative of Algren's life.

a compelling documentary about a literary genius who became a voice for America's disenfranchised.

There are no featured reviews for Algren at this time.