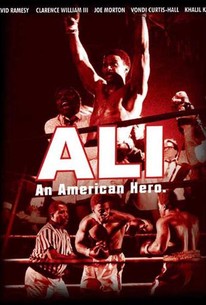 Shown on the Fox network, this made-for-TV biopic stars David Ramsey as legendary boxer Muhammad Ali, whose story is told largely in flashbacks. Beginning with Ali's childhood, when he was known as Cassius Clay, Ali: An American Hero traces the boxer's career, love life, and eventual devotion to Islam. Joe Morton appears as Malcolm X, and the cast also features the talents of Vondie Curtis Hall and Clarence Williams III, the latter as Ali's father Marcellus Clay.

There are no critic reviews yet for Ali: An American Hero. Keep checking Rotten Tomatoes for updates!

There are no featured reviews for Ali: An American Hero at this time.