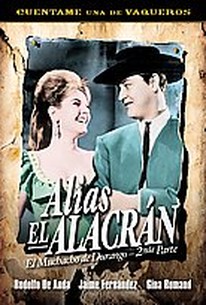 Arturo Martínez's 1961 Spanish-language western Alias el Alacrán - also known as El Muchacho de Durango 2 - follows the adventures the infamous outlaw Billy the Kid, who treks off to Mexico to avoid detection while the notoriety surrounding his latest killings subsides. He slips into an assumed identity - that of a ranchhand named El Venado - and finds a regular job on a Mexican ranch. The establishment's ailing proprietor is engaged to be married to Rosa, a lovely girl in grave danger from a vile bandit and murderer called El Alacrán. Billy pretends to be the woman's fiancée himself and vows to protect her. ~ Nathan Southern, Rovi

There are no featured reviews for Alias El Alacran El Muchacho de Durango 2nda Parte at this time.