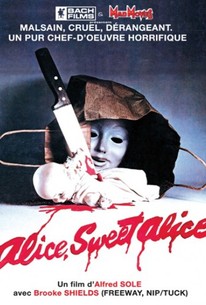 The shockingly brutal murder of a little girl in a church where she was just about to receive her first Communion sets a strong tone for terror in this disturbing horror film. The prime suspect in the death of Karen Spages (Brooke Shields) is her sister, Alice (Paula Sheppard), who happily tormented Karen by donning a mask and a raincoat to scare her. Comforting the grieving mother, Catherine Spages (Linda G. Miller), is her sister, Annie (Jane Lowry); local priest Father Tom (Rudolph Willrich); and Catherine's estranged husband, Dominick (Niles McMaster). Other characters include Father Tom's quirky housekeeper, Mrs. Tredoni (Mildred Clinton); a pair of detectives (Tom Signorelli, Michael Hardstark); and Catherine Spages' obese, cat-loving landlord (Alphonso De Noble). While the police investigation and all visual clues quickly point to Alice, director Alfred Sole manages to cast doubt on the killer's identity while the masked madman strikes several more times. About two-thirds of the way through the movie, Sole allows the viewer to see the killer. However, he smartly keeps his characters in the dark setting up a tense finale which culminates in yet another bloody slaying on holy ground before the lunatic is finally stopped. ~ Patrick Legare, Rovi

Possibly the closet American relation to an Italian giallo.

While its plotting sashays into the ludicrous, with its campiness always underlined by a queasy peculiarity, Alice, Sweet Alice is a captivating exercise in the macabre.

A flop upon its original release, Alice, Sweet Alice has since been saved from complete irrelevance by film scholars and cultists, even if it still doesn't quite enjoy the reputation it deserves.

Prominently placing Catholic iconography in certain frames, Sole does violence to the idea that Christ is the redeemer of anything; least of all our sins.

Well regarded among horror fans, Alice Sweet Alice has aged surprisingly well and stands up to repeated viewings like many of the best films of the seventies, particularly with its look and style.

There's nobody to really root for in this movie, just a joyless bunch of terrified, damaged, working class hypocrites who offer up their children to the alter of Christ without conscience...and suffer gravely for it.

Unfairly, a lot of people know it today because it features the big-screen debut of Brooke Shields.

Sole develops a very strange atmosphere... [he] uses striking colors to punctuate the grim atmosphere, and occasionally an extremely wide angle will crop up to accentuate the feeling of unease; even the sound is tricky.

Every composition is more ornate than at first expected

Very heavily influenced by "Don't Look Now" and about as gory as any slasher film, "Alice, Sweet Alice" is one of the lost gems of seventies' horror. The film features a masked killer, who we come to believe is a young girl named Alice. Throughout the film her family members are harmed, and it seems that she is the culprit. Alice is certainly unstable, as she witnesses violence, she mouths off to the overweight, pedophilic landlord without fear of reprimand, and she threatens her aunt. This thriller balances between the slasher genre and the psychological thriller, as we try to piece together just who the killer is, whether Alice can be stopped, and who is the next person to be killed. Filled with seriously gruesome deaths, this film is really interesting, though it's a bit longer than need be. The only complaint is that there's a lot of overacting from everyone in the cast, and the motive of the killings isn't exactly clear or sensical.

Alice, Sweet Alice is a unique Slasher film in terms of horror delivery. The film doesn't rely on the old blood and guts routine that so many other Slashers have done. Along with Halloween, and Black Christmas; Alice, Sweet Alice is one of the few Slashers to really have a sense of suspense and atmosphere over bloody content, and it pays off. This is what sets this film apart others in the genre. The use of slowly building up the story and having a few twists is reminiscent of the best Italian Giallo films. The film has a lot more substance than most Slashers. The acting is decent at best, never anything great, but for the most part, it's suitable for this type of film. Many critics have complained about Brook Shields in this film, well she's in here all right, but only briefly. Alice, Sweet Alice is an underrated gem of old school horror cinema. Director Alfred Sole crafts a terrific film that delivers effective shock and will most likely make you feel uncomfortable. This is a pulse pounding film that delivers a unique, horrifying experience, one that will stay with you for a while. The fact that this film is only known because of Brook Shields is unfair to the quality of this film. This film is a standout horror Slasher that relies more on suspense and atmosphere to create its horror than straight forward bloody kills. The film is a Slasher, but is also different from the Slashers of the 80's. With effective kills, great suspense, effective characters; Alice, Sweet Alice is a classic of the genre. A film that shouldn't just be seen as Brook Shield's big screen debut.

Upon first viewing "Alice Sweet Alice" it comes across like you average Italian Gaillo/Slasher type film but as it slowly unfolds you begin to realize that it's an indictment of how religious fanaticism can effect the minds of those who are not that stable to begin with. It's these self-righteous fanatics who can committed the most gruesome and unholy of crimes, in the case here inside a Catholic Church,without even the slightest bit of remorse feeling, like Islamic suicide bombers, that their in fact doing God's work. The movie starts off with 11 year-old Karen Spages, Brooks Shield, being grabbed from behind and strangled at the St. Michael Church in Patterson New Jersey, on the very day she's to receive communion, by a masked and unknown assailant. Even though all the evidence to Karen's murder points to her older sister Alice, Paula E. Sheppard, it's very obvious that her killer is an adult, being at least a foot taller and some 30 pounds heavier then Alice. With Alice now the #1 suspect in Karen's death she, who wasn't that normal to begin with, starts to act the part of the killer that she's accused of acting both weird and almost homicidal towards everyone she comes in contact with. When Aunt Annie, Jane Lowry, is brutally attacked on the stairway of Alice's home by the masked and yellow raincoat wearing psycho it's determined, by the police school as well as her parents, that Alice who's suspected of the assault desperately needs mental therapy. Alice committed to a juvenile detention center is then forced to take a polygraph test to determine if she's telling the truth about the two attacks, one being fatal, on her sister Karen and Aunt Annie. The test, which Alice passed, shows that if Alice did in fact commit these two crimes she by passing it has no recollection of them. The movie soon turns into a bloodbath of religious horror with the masked killer coming out into the open and first slashing and then throwing to his death, down a three story landing, Alice's father Dominick Spages and then later slicing up the fat guy who lives down the hall, the landlord, of Alice's apartment house Mr. Alphonso, Alphonso DeNoble. We get to see well before the movie is over, with some half hour left to go, who the masked killer really is which makes the blood-splattering ending, during Communion at St. Michael's Church, a bit anti-climatic. A notch above the usual slasher movies that came out in the 1970's and 1980's "Alice Sweet Alice" or, as it was originally titled, "Communion" is a lot like the 1973 religiously-inspired blockbuster "The Exorcist" in it's treatment of personal guilt in traditional Catholic teachings. In fact the mad killer in the movie felt that the guilt was on his or her victims heads not his own. Recommended