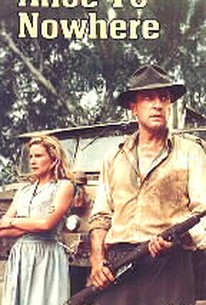 The two-part, two-hour Australian miniseries Alice to Nowhere was adapted by David Boutland from the suspense novel by Evan Green. Set in 1954, the story focused on the aftermath of a botched attempt to steal the crown jewels. Rosey Jones starred as Nurse Barbara Dean, who, unaware that a valuable necklace has been planted on her, is pursued into the Australian outback by a pair of sadistic criminals named Johnny Parson (John Waters) and Frog Gardiner (Esben Storm). As the two crooks grow more evil and irredeemable with each passing day, they leave a trail of terror and death behind them -- with even more horror still to come for the hapless heroine. Debuting June 30, 1986, Alice to Nowhere was co-produced by 10 Network and Crawford Productions. ~ Hal Erickson, Rovi

John Waters
as Johnny
View All

Critic Reviews for Alice to Nowhere

There are no critic reviews yet for Alice to Nowhere. Keep checking Rotten Tomatoes for updates!

There are no featured reviews for Alice to Nowhere at this time.