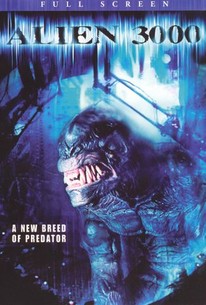 The only key to solving the riddle behind a shocking crime might be finding a woman who was driven mad by the tragedy in this horror story. A handful of college students are killed and mutilated during a camping trip, and the authorities, concerned about the gruesome crime, call in a secret military unit who has been trained to track information on unusually violent crimes. When their time-tested techniques of forensic science and aggressive interviewing don't bring results, the military authorities call upon the only survivor of the attack for help. However, Kate (Megan Molloy) was severely traumatized by the killings, and has been committed to a mental institution; can they find a way to break her out of the asylum so she can come to their aid? Produced as a sequel to the 1999 thriller Unseen Evil, Alien 3000 (aka Unseen Evil 2) also stars Lorenzo Lamas and Priscilla Barnes.

Sometimes, it's just not gratifying to seek out obscure copycats of beloved masterpieces.

Alien 3000 just isn't very entertaining outside of a few sporadic moments here and there of mostly unintentional laughter, almost always involving the not so special effects.

Formerly known as Unseen Evil 2, and forgive me for using such a dorky movie critic joke, but "unseen" is precisely what it should remain.

There are no featured audience reviews yet. Click the link below to see what others say about Alien 3000!