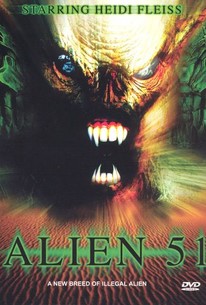 Directed by Brennon Jones and Paul Wynne, Alien 51 revolves around a genetic-engineering experiment gone haywire, as projects involving dangerous alien DNA are wont to do. This time, the fanged, half-alien creature escapes from the confines of the lab and ends up terrorizing a circus that had initially planned to make him a sideshow attraction. The film stars Mia Riverton and Heidi Fleiss.

It's just yet another terrible science fiction farce in the age of low-budget spectacles...

There are no featured audience reviews yet. Click the link below to see what others say about Alien 51!