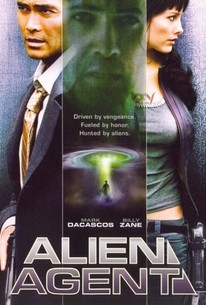 An teenage orphan and an intergalactic warrior join forces to prevent the world from being taken over by a ruthless race of aliens plotting to enslave mankind in this sci-fi action movie starring Mark Dacascos and Billy Zane. Rykker (Dacascos) is a benevolent alien who has become trapped on planet Earth. He's made it his mission to protect the human race from the evil Syndicate - an alien fifth column that is determined to claim Earth as their own. In the aftermath of a fierce highway battle between Rykker and a particularly troublesome gang of Syndicate agents, top Syndicate leader Saylon (Zane) arrives on Earth to construct the wormhole that will allow his warriors to launch a full-scale invasion. But in order to make that happen, ruthless Syndicate heavy Isis (Amelia Cook) must first gather the parts needed to assemble the portal. Upon hijacking a truck that is transporting the parts she needs, Isis makes the fatal mistake of murdering Julie (Emma Lahana)'s entire family. Now suddenly left alone in the world and determined to make Isis pay for her transgression, Julie teams with Rykker to take out the Syndicate at the highest level. But while Rykker doesn't believe that a human can help in the fight against such powerful otherworldly forces, Julie ultimately proves her worth by saving his life. Later, after a hair-raising cross country battle against Syndicate assassins, Rykker and Julie face off against Saylon and Isis in the volatile nuclear reactor where Saylon is constructing his interplanetary wormhole.

Darren Shahlavi
as Kaylor
View All

There are no critic reviews yet for Alien Agent. Keep checking Rotten Tomatoes for updates!

Saw this"made for tv epic"...and wished that I could have wasted my time watching something else...LOL! Such a shame that I like Mark Dascascos as an actor...what a waste of talent in this flick.