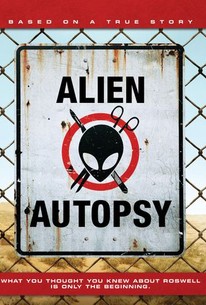 Director Jonny Campbell teams with screenwriter William Davies for this satirical look at the notorious, purportedly genuine "Alien Autopsy" video that fascinated viewers worldwide before being exposed as an elaborately staged hoax in 1995. Aired in America by the Fox network, the Alien Autopsy video caused an overnight sensation among UFO enthusiasts while proving just how susceptible to hype the media truly is. Now viewers can follow the adventures of ambitious British pranksters Gary (Ant McPartlin) and Ray (Declan Donnelly) as they execute one of the largest-scale practical jokes ever attempted. Bill Pullman and Harry Dean Stanton co-star in a comedy that encourages viewers to believe none of what they hear, and only half of what they see. ~ Jason Buchanan, Rovi

Funny and entertaining although far from an X-File, you gotta see this ALIEN AUTOPSY.

this movie doesn't know what it's trying to be

Alien Autopsy is breezy and funny, with an energy that really keeps you involved.

This movie scores well on the quirky British movie scale.

It's a droll story, told with a straight face that makes the quintessentially British shuck-and-jive all the more hilarious.

This is never less than watchable, but it can't decide whether it wants to be a comedy or a drama and ends up failing as both.

Alien Autopsy is a pretty amusing mockumentary style retelling of the story of two London lads who fooled a lot of the world into thinking they had authentic footage of an autopsy being performed on one of the alleged aliens found during the Roswell incident. Fun movie.

I am absolutely not a fan of "Ant & Dec", and find them both immensely slappable. Yet, I loved the idea of this film and really wanted to see it. Lo and behold, the film itself is really good, very likeable and totally entertaining - unlike "Ant & Dec" who are the opposite of all of those things. If you like "Ant & Dec" you'll probably appreciate this film even more. If not, and you can stomach them for 90 minutes, I recommend giving this a try. Harry Dean Stanton's in it too, if that'll help persuade you..

I doubt you will be rolling in the aisles but it's funny in its own way. Not to mention the choice hits of 1995 on the soundtrack