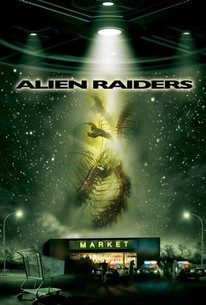 A small town supermarket serves as the setting for this suspenseful sci-fi thriller about a malevolent alien seeking to take over the human race. Nothing unusual ever happens at Hastings Market, so when a heavily armed gang enters the store guns blazing at closing time, the terrified shoppers and employees at first assume they're the victims of a violent armed robbery. But appearances can be deceptive, as they're about to find out. Something inhuman has gotten loose inside Hastings Market - something that, if allowed to escape, could bring about the downfall of humanity. Now, as the police surround the building, a mysterious man begins scanning everyone inside in an attempt to root out the alien invader. Within one of these people dwells an extraterrestrial with the power to claim our planet as its own. But the worst is yet to come, because when an off-duty cop attempts to play hero, he inadvertently destroys any chance of determining which one of the hostages is serving as host to the alien. Now, the only way ensure the survival of our species is to kill everyone in sight, or die trying.

What could have been a fairly rote monster movie gives us a level of suspense that you normally don't get for a film that comes in under the radar.

While perhaps not the most original or groundbreaking sci-fi/horror picture ever made, Alien Raiders at least succeeds in executing a simple-but-effective formula.

Coming across like "Quentin Tarantino Meets Aliens in a Supermarket," this nifty little movie is enough to restore your faith in the vitality of low-budget independent cinema.

It's The Thing set in a supermarket!

Just like the classic From Dusk Till Dawn, if not for the ridiculous title, you wouldn't have any idea this was a genre film for the first third of the movie. The acting is top notch and notable. This is a TV geek's dream what with favorites from three st

Suffice to say that Alien Raiders has a few modest surprises up its sleeve, and that's more than most low-budget genre concoctions even attempt.

A great alien film. Almost as good as "Unearthed." Although it is kind of a rip off of the 1978 film "Alien" and it's sequel "Aliens," it was much different than any other alien film, and had a good location for it.

Well what can I say about this movie? Did you like "The Thing"? If the answer is yes, then you will love this. Its basically "The Thing" in a supermarket. Trust me, its a lot better than it sounds! Watch it

Just finished watching this. It was a low budget movie but not that bad. Liked the ending.

The hype was unwarranted. Well done for it's budget, but thoroughly unoriginal.