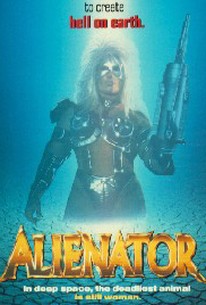 There's not much doubt this film's a direct descendant of Schwarzenegger's Terminator classic, though it's certainly a distant descendant. Here a fugitive from a far-away planet escapes execution in a hijacked spaceship and crashes on the planet Earth where he's befriended by some young campers and the local constable. However this Terminator take also has a chasing enforcer (the Alienator) who shows up before long, sent to capture the escapee. The earthlings come to the defense of their new friend and fight it out with the indestructible Alienator.

Teagan Clive
as The Alienator

There are no critic reviews yet for Alienator. Keep checking Rotten Tomatoes for updates!

There are no featured reviews for Alienator at this time.