All About My Mother (Todo sobre mi madre)1999 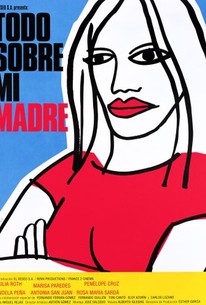 Critics Consensus: Almodovar weaves together a magnificent tapestry of femininity with an affectionate wink to classics of theater and cinema in this poignant story of love, loss and compassion.

Critics Consensus: Almodovar weaves together a magnificent tapestry of femininity with an affectionate wink to classics of theater and cinema in this poignant story of love, loss and compassion.

Critic Consensus: Almodovar weaves together a magnificent tapestry of femininity with an affectionate wink to classics of theater and cinema in this poignant story of love, loss and compassion.

All About My Mother (Todo sobre mi madre) Photos

Pedro Almodóvar directed this story of a woman and her circle of friends who find themselves suffering a variety of emotional crises. Manuela (Cecilia Roth) is a single mother who has raised her son, Esteban (Eloy Azorín), to adulthood on her own and has come to emotionally depend on him. One night, Manuela and Esteban take in a production of A Streetcar Named Desire; after the show, Esteban is struck and killed by a passing motorist as he dashes into the street to get an autograph from Huma Rojo (Marisa Paredes), who played Blanche. Emotionally devastated, Manuela relocates to Barcelona in hopes of finding her ex-husband (and Esteban's father), who is now working as a female impersonator. Manuela becomes reacquainted with old friend La Agrado (Antonia San Juan), a transsexual, and is introduced to Sister Rosa (Penélope Cruz), a good-hearted nun who has to contend with her considerably more cynical mother (Rosa María Sardà). While looking for work, Manuela becomes acquainted with Huma Rojo. Huma, on the other hand, has troubles of her own, most involving her drug-addicted significant other, Nina (Candela Peña). Displaying Almodóvar's trademark visual style and a unusually strong sense of character-driven drama, Todo Sobre Mi Madre/All About My Mother received a highly anticipated theatrical run in Spain before winning the Best Director award at the 1999 Cannes Film Festival; in 2000, Almodóvar would receive the Academy Award for Best Foreign Language Film. ~ Mark Deming, Rovi

Critic Reviews for All About My Mother (Todo sobre mi madre)

This is humanism in drag: Almodovar's passionate redefinition of family values.

It brims with life.

It's a lovely work.

An emotionally satisfying and brilliantly played take on the ups and (mostly) downs of a group of less-than-typical female friends.

For me it felt like a good many weeks at a politically correct summer camp.

All About My Mother, for all its self-deconstruction, is played with more sobriety and conviction than any of Mr. Almodóvar's previous films.

Arguably the best ever film by visionary Pedro Almodóvar, this heartfelt comedy drama is a celebration of womanhood and maternity which also explores - with tender sensitivity - the trials and tribulations of LGBTQ+ life.

On paper, it features a plot which sounds like the soapiest of Sirk mixed with the most lurid of telenovela and yet, as a testament to the writer/director's mastery, it's a vividly joyful odyssey of fluctuating emotional tones.

...this melodramatic narrative, in the end, is a satisfying story about femininity and companionship. Arguably one of Almodóvar's masterpieces...

For all the film's purple prose and soap opera dramatics, Almodóvar never loses sight of his characters' simple humanity.

Pedro Almodóvar's winking, melodramatic love note to actresses, Tennessee Williams, and Barcelona is one of those movies that balances the sad and joyful in just the right proportion.

Audience Reviews for All About My Mother (Todo sobre mi madre)

All About My Mother is a challenge to the conservative and conventional on family and relationships. Masterful performances, even from the young Penelope Cruz. Outrageously beautiful.

It's nearly impossible to not be swept up in Pedro Almodóvar's melodrama "All About My Mother." It's a very affecting story that is clearly very personal and told with great care. The performances, especially from Cecilia Roth, are lovely and the cinematography is fluid and precise. "All About My Mother" is beautiful, funny and touching with just enough Spanish melodrama to wash it all down.

Manuela (Cecilia Roth) is the central character in this movie. She lives in Madrid with her son Esteban (Eloy Azorin),and for his birthday, she takes him to a production of Streetcar. The play holds special meaning for her as she played the role of Stella when she was younger. The play moves both of them, and Esteban wants the autograph of Huma Rojo (Marisa Paredes) after the show. He also wants Manuela to tell him the story about his father, an unknown figure in his life. Rojo enters a taxi before Esteban can reach her, so he chases after the taxi, only to be hit by a car and killed. She takes a journey back to Barcelona, where she left Estebans father long ago. For her son, Manuela sets out to find her sons father.....

Not sure why, but it was not a grabber for me. To me, it was just an "ok" movie. I just did not connect with any of the players. I watched the whole thing, though it was a struggle. Interesting locale and very well made, but for some reason I was bored most of the time. I look back now on other Almodovar projects, and it appears that I am not a big fan of his movies...cuz I didn't rate those too high, either.

All About My Mother (Todo sobre mi madre) Quotes