All About the Benjamins2002 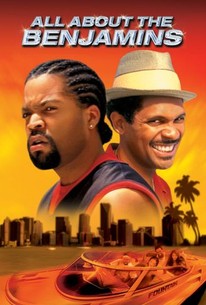 Critics Consensus: A sloppy, poorly directed action-comedy, All About the Benjamins is too derivative and gratuitously violent.

Critics Consensus: A sloppy, poorly directed action-comedy, All About the Benjamins is too derivative and gratuitously violent.

Critic Consensus: A sloppy, poorly directed action-comedy, All About the Benjamins is too derivative and gratuitously violent.

All About the Benjamins Photos

Rap star and actor Ice Cube produces, co-writes, and stars in this comic crime thriller that reunites him with his Next Friday (1999) co-star Mike Epps in the 48 Hrs. (1982) mold. Cube plays Bucum Jackson, a Miami bounty hunter for Martinez Bail Bonds who's tired of his dangerous, unprofitable profession and wants to start his own private investigation firm. Lacking stake money, Bucum is forced to hunt down a small-time grafter named Reggie Wright (Epps), a fast-talking confidence man who's crossed his path before. Except that this time, Wright tries to avoid his pursuer by hiding in a van being driven by a pair of murderous diamond thieves who've just made off with 20 million dollars worth of stones. They're in the employ of lethal crime lord and yacht broker Williamson (Tommy Flanagan), someone that neither Reggie nor Bucum is anxious to cross, but it seems that Reggie left his wallet in the van, a wallet containing a winning lottery ticket worth 60 million dollars. The hunt is on for big money as the mismatched duo tries to outfox a wily syndicate for both the ticket and the precious gems. The directorial debut of music video director Kevin Bray, All About the Benjamins (2002) co-stars Eva Mendes, Carmen Chaplin, Valarie Rae Miller, Jeff Chase, Roger Guenveur Smith, Anthony Michael Hall, and Lil' Bow Wow.

Kevin Bray
as Criminal
View All

Critic Reviews for All About the Benjamins

Violent film for Ice Cube. He can do better.

The home-run performances of Cube and Epps are handicapped by inept and illogical action sequences.

Mugging, not robbery, is the name of the game.

Something puddles to nothing in this relentless Miami sun.

They failed to get a consistently funny script or a director capable of effectively staging an action scene.

This one is a waste of your Washingtons.

I could go on and on about how funny this film is, because it is truly great comedy.

Directed by Kevin Bray, whose crisp framing, edgy camera work, and wholesale ineptitude with acting, tone and pace very obviously mark him as a video helmer making his feature debut.

It plays like a by-the-numbers action flick that happens to have a few funny lines in it. It is barely watchable.

Hit and miss as far as the comedy goes and a big ole' miss in the way of story.

Audience Reviews for All About the Benjamins

Mike Epps, the worst stand up I've ever seen.

Bucum: Shoot out the back tire! Reggie: Who do you think I am, Mel Gibson? A stupid funny buddy-action-comedy that works because of how well Cube and Mike Epps get along. A lot of fun to watch, with nothing else to it, but still funny enough. And Eva Mendez is always welcome, so that also helps. Funny parts and decent action.

Enjoyable black comedy. But Bad Boys is the definitive. Some good moments - especially the scenes with the stun gun and Eva Mendes is prety wacky - but a good action flick for a night in.

All About the Benjamins Quotes