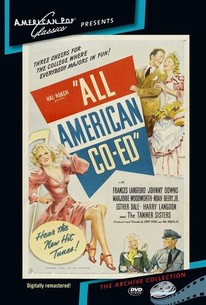 This 48-minute Hal Roach "streamliner" represents a rare directorial assignment for veteran Hollywood choreographer LeRoy Prinz, who also produced the film. Johnny Downs stars as Bob Sheppard of Quinceton University, who is appointed by his frat brothers to get even with the snotty sorority gals at all-female Marr Brynn U. This requires Bob to dress up in drag as a "blonde bombshell" and to enter Marr Brynn's annual beauty contest. When he's not flouncing around in curls and crinolines, Bob spends his time romancing pert co-ed Virginia (Frances Langford). The supporting cast ranges from silent-comedy veteran Harry Langdon to leggy newcomer Marie Windsor. The film's four musical numbers (representing approximately 25 percent of the running time!) include the Oscar-nominated "Out of the Silence".

Lillian Randolph
as Deborah, The Washwoman

There are no critic reviews yet for All-American Co-Ed. Keep checking Rotten Tomatoes for updates!

There are no featured audience reviews yet. Click the link below to see what others say about All-American Co-Ed!