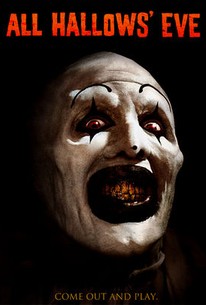 A group of friends who played a cruel prank on an innocent little girl fall prey to a sadistic psychopath in this slasher film starring Ashley C. Williams (The Human Centipede), Danielle Harris (Hatchet 2 and 3), and Tiffany Shepis (Chainsaw Cheerleaders). ~ Jason Buchanan, Rovi

Critic Reviews for All Hallows' Eve

Audience Reviews for All Hallows' Eve

Some decent (albeit cheap) creature design, but still very much a let down.

It wouldn't be a proper month for a horror fest without some sort of anthology film. And, unfortunately, this is the first one that I chose for this month. I was considering watching Tales from the Darkside: The Movie, but I'll have to leave that later as I got a trial for this add-on channel on Amazon Prime. Specializes in horror movies, you see, which is where I found this one to begin with. I'm feeling lazy today, as I have been for almost every anthology flick I've seen lately, so I'm not gonna bother reviewing each short individually. Plus I honestly don't think I could go into that great of detail into each short that would warrant an individual mini-review. With that said, this movie wasn't what I would have called good or anything of the sort, but at least each individual segment of the film attempted to have their own distinctive visual style. The 9th Circle, the first segment, had a more 80s VHS style of look. The second short, whose name I didn't get, looks just like a normal low-budget affair. And the third short, Terrifier, looks much like the second short, except that Terrifier has an aged, grainy look like it was a 70s grindhouse flick. It didn't really work, though, because the film looked way to modern for it to have that aged, grainy look, so there was a certain disconnect from how it actually looked to how they actually wanted it to look. So, really, it didn't work as well as, say, The 9th Circle. There's also a wraparound story, that connects all of the segments together, and it features a babysitter looking after these kids on Halloween watching this VHS tape that got left in one of the kids' candy bag. It's basic stuff, but the ending itself, to the wraparound segment at least, was actually strong in that it goes places that some filmmakers are simply much too afraid to go to. The gore itself, in the wraparound, isn't great, but I gotta give them props for at least going to some dark places. Which brings us to the segments of the film on the VHS tape. Honestly, none of them are really what I would call good, though I have to give props where they're due and the clown featured in the film is suitably creepy enough. The 9th Circle, to me, would have to be the best of them all simply due to the fact that it's the only one that really goes all out with its concept. It all boils down to finding a woman for Satan to impregnate, really, but it's a pretty decent short in and of itself. The second short, the one with the woman who just moved into her new house being hunted down by this alien is, honestly, pretty fucking terrible. The alien looks awful and the acting by the woman in peril is even worse. Seriously, it was fucking dreadful. Might have been one of the worst shorts in any anthology movie I have ever seen and that is no joke. The third short, Terrifier, isn't great as it's just really basic. The lead in the short is basically running away from the clown and no matter what she does, or how far she drives, she cannot escape him. It's simple and not particularly interesting, but the gore, at the very least, is at its strongest in Terrifier. So it has something to offer in spite of its relative nothingness. The wraparound does exactly what the wraparound does, it connects all of the segments together while weaving its own, small, story. Again, nothing special, but it's there. The acting is for sure at its best here, at least by the actress who played the babysitter, she was solid. And this is where things end, as I mentioned the ending to the wraparound was good enough. I don't really know what to make of this anthology film. I didn't find it to be worse than VHS: Viral, believe it or not, even though Viral had a bigger budget. But I can't say that it was a mixed bag either, because I didn't find any of what the film had to offer, in terms of shorts, good. At its best, the movie is just watchable and and its worst, it's downright terrible. Two stars is what I really feel comfortable giving this, but I wouldn't blame anyone if they thought it was either better or worse. It's that type of flick.