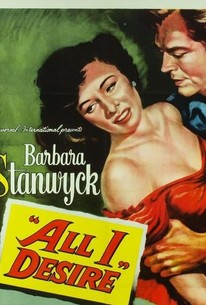 All I Desire Photos

All I Desire an early exercise in Douglas Sirk Baroque, is set at the turn of the century. Long divorced from her husband Richard Carlson, itinerant actress Barbara Stanwyck returns to her home town to watch her daughter perform in a high school play. Stanwyck decides to turn over a new leaf and devote herself to the daughter she's never known. This she finds next to impossible, thanks to ugly small-town gossip attending her return. The film was obviously building up to an unhappy ending, but producer Ross Hunter intervened, tacking on an unbelievably upbeat denouement. This artistic outrage evidently didn't hurt Hunter's relationship with director Douglas Sirk, inasmuch as the two would continue to successfully collaborate in the future. All I Desire is based on a novel by Carol Brink.

Critic Reviews for All I Desire

Most certainly one of Douglas Sirk's lesser movies, All I Desire lacks some of the heart-rending visual flourishes of his masterworks, but it nonetheless remains a pretty solid piece of soap.

The dark corners in [Douglas] Sirk's America are first explored in All I Desire...

Sustained by wonderful performances, especially by Barbara Stanwyck, the story is engaging and develops in unexpected ways

All the flaws cannot be attributed to Sirk, who does fine work slicing up small-town America's bourgeois life.

[It] may be the most ironic statement on the disturbing allure of 50s suburbia that Sirk ever made.

Audience Reviews for All I Desire

There are no featured audience reviews yet. Click the link below to see what others say about All I Desire!

All I Desire Quotes