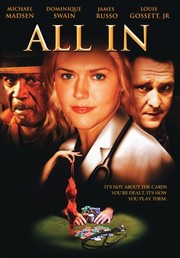 Benjamin L
April 17, 2011
I'm not sure why people dislike this movie

Anthony F
February 2, 2010
A dire effort of a movie. Cut your losses and fold

Private U
February 2, 2010
Story was not very well told, or acted, or anything really. I'm a sucker for late night poker tournaments when I can't sleep, and it was about on par with that insomniacal urge.

Felix H
½ February 2, 2010
Madsen doing his hardbitten turn and Gosset Junior adding a touch of polish in his minutes are about the only things this film has going for it. Poor plot, poor acting with poor dialogue and character interaction that is either shallow or overplayed. Fold.

Nino E
February 2, 2010
madsen and gossett jr were expectedly amusing as supporting characters, but swain just couldn't pull off the lead role. interesting cameos from poker pros, there's a weak subplot of a corrupt medical resident, but that's about it. you're better off spending time watching WPT episodes.

James R
½ February 2, 2010
Dominique Swain is vivacious, smart, and easy on the eyes. It really is a pity that she went absolutely nowhere after playing the rebellious daughter in Face/Off. And by "absolutely nowhere," I mean "starring in films like All In." Some of the poker scenes in this movie were fun to watch, and Louis Gossett Jr. added a bit of much-needed class, but the believability meter of this movie fell through the floor after about fifteen minutes, and didn't rise much thereafter. The acting was shallow, the dialogue was minimal, the humor wasn't humorous, and the romance had no spark. Poker fans would enjoy this movie...not sure if anyone else would.

Max A
February 2, 2010
I don't know how they make movies this bad and get away with it, but this is unbelievably awful. If you like poker, stay away. It's actually bad enough to be funny, so it might be worth a watch among a group of really drunk friends. Maybe you could take a shot every time someone says something stupid. You would be passed out inside of 5 minutes.

Jami L
½ March 16, 2009
Anyone who knows me at all, knows that I am a poker junkie. More to the point, I am a Hold Em' junkie. So, when I came across this movie, I had to watch it for that reason alone.
All In is the story of Alicia "Ace" Anderson, a first year medical student and a gifted poker player.
I had A LOT of problems with this movie. First, the acting was terrible. I love Reservoir Dogs, and no one is cooler than Mr. Blonde. I have great respect for Michael Madsen as an actor, but even he wasn't able to pull this movie out of the acting toilet.
My second issue was the script was horrible, and there were plot holes galore, something that I just can't stand. One being, since when do they let first year med students have patients on the second day of class? The whole sub plot of her being a med student and the corrupt doctors, should have been axed because it just added to the whole rotten smell of this film.
Third, if you are going to base a movie on a real life poker tournament, check your facts and know the rules. The big time poker playing doctor, had never actually played a real live poker tournament in his life. In a real poker tourney, you can not splash your chips into a pot, and it's just rude besides.
I did appreciate the fact that they had John Juanda and Eric Seidel in there, playing themselves, as real life pro players. That earned the movie a star, and Michael Madsen earned it the other half a star for being cool.
If you want to be entertained by poker playing, just catch the WSOP of the World Poker Tour on ESPN or the Travel Channel. I would rather listen to poker cry baby Phil Hellmuth whine for an hour and half, then to ever have to see this movie again.

Timm S
½ December 13, 2008
Little Miss Perfect Saves The Day For Everyone. It Is Also So Frustrating To Watch As None Of The Cast Seem To Give A Damn Really. Oh, Except For The Team Of Scooby Doo Wannabe's Chearing For Little Miss Perfect. Lame.

Josh A
July 13, 2008
In the slew of recent bad poker movies, this is the absolute bottom of the barrel. Abysmal acting, cliche script-writing, terrible directing, lame poker scenes, and a horrible soundtrack. Everything about this movie is horrific except for the fact that Seidel and Juanda make appearances in it.

Martin Ĺ
June 24, 2008
It's hard to give credit to much in this film. Well, Michael Madsen is always enjoyable to watch even if he doesn't give the best performance. But the best performance is without a doubt given by Madsen. The script is really bad and the directing is not worth much of anything. Dominique Swain is really awful as is the rest of the cast, then again maybe exceptr Madsen and perhaps Gossett Jr... I don't know. Well, well better luck next time.

Walter D
½ June 4, 2008
This movie paints such a bad picture about medical students. Between the horrendous acting, the cliched 'plot twists' and the portrayal of med students, it wasn't worth even renting
Page 1 of 3