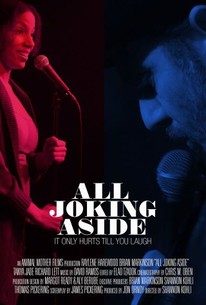 All Joking Aside Photos

CHARLENE MURRAY wants nothing more than to become a stand-up comedian, but life won't stop getting in the way of her ambitions. From her soul-sucking job, to the heartbreaking estrangement from her family, to that bully who heckles her first amateur night gig, she just can't catch a break. But when she discovers that the heckler, BOB CARPENTER, actually used to be a big name on the comedy circuit before his career crashed and burned, she turns to him for mentorship; a request that is quickly shot down by the now grizzled barfly. But Charlene is tenacious, and over time the two find something in each other that has been missing in their own lives, a friendship is born, and Charlene learns to find funny in places she never expected.

Critic Reviews for All Joking Aside

A film about stand-up should, of course, be funny and "All Joking Aside" has some side splitting moments. But it also has heart, which makes it a rarity in the genre'. The heart here comes from the performances of the three leads.

In spite of a few formulaic story beats, All Joking Aside rides strong on emotionally resonating performances and a thoughtful script filled with humor and heart. Just the kind of movie we need to navigate these dark depressing times.

It works in this Canadian production because the veteran Markinson and the relative novice Harewood are both charming, and director Shannon Kohli, working from a script by James Pickering, captures an unforced chemistry between them.

Director Shannon Kohli shows us that the process of crafting and executing an act takes an inhuman level of focus, and the costs can be brutal.

Not a particularly original routine, but the performances outshine the material.

What prevents All Joking Aside from being successful aren't the jokes (many of which land nicely) or the performances (a few being a little too stiff), but the rush to get to the good stuff instead of putting the time in to earn it.

Stand-up is so over-covered as film subject matter that the only way it can work in a movie these days is as backdrop for a more interesting story in the foreground.

With quick pacing, succinct writing, authentic performances and a genuine father-daughter chemistry between the leads, it's a film that will warm your heart and make you laugh.

I get why people want to make movies about comedy that make you cry. But making you laugh first - I mean, really laugh - would make for a potent combination indeed.

All Joking Aside gives us but a glimpse of the pain behind the smiles, but like an evening at a comedy club, leaves us with a good-natured grin.

There are no featured reviews for All Joking Aside at this time.

All Joking Aside Quotes