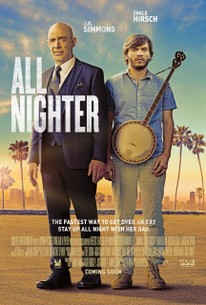 Martin is a struggling LA musician nervously meeting his girlfriend Ginnie's intimidating father, Mr. Gallo, for the first time. Gallo is a tough-minded, no-nonsense international businessman who never has enough time for Ginnie. At dinner together, Gallo is resolutely unimpressed by Martin, Martin grows increasingly uncomfortable, and the meal is a disaster. Six months later, Martin's broken-hearted over being dumped by Ginnie, who has "moved on", when Gallo shows up at his door looking for his daughter. Her cellphone is off and she has not responded to any texts or emails. Although it's the last thing he wants to do, Martin is "persuaded" by Gallo to take him to where Martin believes Ginnie is living. Ginnie isn't there either, and Martin and Mr. Gallo are forced to spend the rest of the day and night together, searching for her all over town. As they attempt to solve the puzzle of what is going on in Ginnie's life, they encounter her crazy friends and get into increasingly desperate jams of their own making. Some property is destroyed, some laws are broken, but an uneasy friendship between Martin and Gallo is born.... as they discover that they, rather than Ginnie, are the ones who are truly lost. ALL NIGHTER was produced by Spring Pictures' Mandy Tagger Brockey and Adi Ezroni (A LATE QUARTET, DEAN), Wing and a Prayer Pictures' Ron Perlman, Josh Crook (ALL I SEE IS YOU, POTTERSVILLE) and P. Jennifer Dana (IT FOLLOWS).

Critic Reviews for All Nighter

The story's just chaff; the movie's worth seeing for its performances if you're a fan of those involved. Otherwise, it's forgettable, just like the last hours of being up all night.

Despite J.K. Simmons' gruff charm and inarguable charisma, the movie is so slight it vanishes without a trace faster than the dislocated Ginnie.

It's Netflix and chill fodder for sure, but even with its relatively short running time and Simmons' rampant charisma, All Nighter feels way too much like its own title, a soporific exercise in style over substance.

The part may be tailor-made for Simmons' no-nonsense persona, and his performance reliably rock solid, but the bland execution of director Gavin Wiesen and the uninspired scripting of Seth Owen have no comic zing. It's a night all too easy to forget.

In constantly shifting its genre allegiances, the film reveals itself to be a cinematic jack of all trades and a master of none.

It's slickly directed by Gavin Wiesen, and Seth Owen's script has a relaxed, freewheeling trajectory.

There's a formula behind All Nighter that isn't all too original but the life that J.K. Simmons and Emile Hirsch bring to the formula make up for the lack of originality on display.

It's not even a bad movie, it's something worse: forgettable. [Full review in Spanish]

As with many all-nighters, the evening starts with some good-natured shenanigans and devolves into behavior we'd rather forget.

[All Nighter] unravels when it devolves too far into the madcap ... it feels like the filmmakers ran out of ideas.

"All Nighter" is a missed opportunity, formulaic and tiresome, with Wiesen keeping tight control of material that's usually unleashed from frame one.

Not even J.K. Simmons' considerable comedic talents can rescue All Nighter - a tranquillized, misjudged and directionless snoozefest.

David James
We Got This Covered
View All Critic Reviews (14)

Audience Reviews for All Nighter

There are no featured audience reviews yet. Click the link below to see what others say about All Nighter!