All Quiet on the Western Front1930 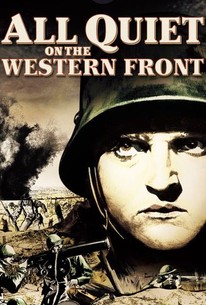 All Quiet on the Western Front Videos

All Quiet on the Western Front Photos

Follow a group of idealistic young men as they join the German Army during World War I and are assigned to the Western Front, where their patriotism is destroyed by the harsh realities of combat.

Walter B. Rodgers
as Behm

Fred Zinnemann
as Man
View All

Critic Reviews for All Quiet on the Western Front

All Quiet on the Western Front will grip you and leave an indelible mark upon your soul.

[All Quiet on the Western Front] strips war of all its glory and bares its sickening brutality with a tragic grimness that spares nothing and leaves the spectator shaken and speechless.

How it was passible to attain such remarkable accuracy in the battle episodes is a story in itself. But the delicate and intimate touches in the production are exceptionally fine, and though the story is somber there is the relieving humor here and there.

There is not much characterization in the picture. This is another reason why it is not a masterpiece. Many times it seems like a news reel actually taken at the front during 1917. It is this photographic detail which limits it as a work of art.

All Quiet on the Western Front is unquestionably the greatest screen document of war and its bitter, terrifying futility that has yet been presented.

All Quiet on the Western Front is beautifully photographed, and the difficult trench scenes have been reproduced with distinctness and clearness of detail.

If ever there was a play aimed to bring about permanent peace, this Universal picture, directed by Lewis Milestone and produced by Junior Laemmle, is it.

Its presentation of bombardments and actual fighting is without doubt the finest and most convincing thing of its kind that the screen has yet offered to the public. Another feature is the magnificent acting of all those who are concerned in the picture.

In a perfect world... this would be the war movie to end all war movies, so definite and forceful is it in its anti-war stance, while also exhibiting such grace as to place it among the best cinema has to offer in any genre.

A thoroughly effective cast enacts the events. There are many war scenes in All Quiet and tragedy presented directly and without sentimentality, but there Is levity and romance.

Easily the greatest of the talkies.

The picture is splendidly acted. Louis Wolheim, veteran of a hundred stage battles, is a most remarkable Katcynski, and Mr. Ayres is equally effective as Paul.

Audience Reviews for All Quiet on the Western Front

Based on a novel and probably one of the most realistic war films I have ever see. WW1 is the setting for this unusual look at life for German troops on the front line. Its unusual because its a 30's American film focusing on German soldiers and not the more obvious Allies of Britain, France and Russia. Starting off much like 'Full Metal Jacket' the film covers a group (a class fresh out of school) of young German lads ready to join the ranks and fight for their country. From here on we follow them through harsh training and into battle where they very quickly realise the horrors of war. One by one they are killed off as the film becomes more and more tragic, and all this in a 1930's film! The first thing that hits you are the amazing visuals and hard work clearly put into the film, its incredible! The realism of the trenches, war torn no man's land, the uniforms for both sides and the brilliant special effects, mainly revolving around some pretty big explosions near actors, are all superbly created. By today's standards everything still looks good whilst the old black and white imagery only helps the film appear more realistic and authentic. The film could easily be the 'Saving Private Ryan' of its day, its almost as good as real footage. Of course the actors are of a different era so one can expect performances without the type of grit that we are used to today. Some scenes are almost slightly pantomime-esque with some slightly funny moments of comedy and slapstick which do lighten the mood (mainly at the start before the characters enter the war). I think we all know sequences of corny acting and dialog tend to add to the charm of old movies like this, they are easily forgiven. Make no mistake though this film is a history lesson and seeing as it was made about 12 years after WW1 actually ended its amazing people watched! especially as it followed the Central Powers (the enemy). Being so close to the war is obviously why its so accurate. The harrowing sequences of men being mown down by machine gun fire, one after another without a chance, the screams of the young troops as they go crazy from the constant shelling, the mud, barren landscapes, bodies, barbwire and of course the famous bleak depressing ending for the main lead nailing home how cheap life was. I think the main point in the film is how the lead protagonist Paul Baumer (like his friends) starts out as a patriotic young German wanting to go off and fight for his country. Encouraged, motivated and inspired by his surroundings whilst being practically lied to by his school teacher Professor Kantorek into doing what is thought to be right, to save the Fatherland. Baumer then returns to his home town towards the end of the film only to find his school teacher spouting the same nonsense to more young boys, trying to get them to join up and fight. He is invited in to speak of the glory of war but instead rages how its all lies and there is nothing but misery and death for all who join up. He is shunned by his old teacher and branded a coward by the young boys, so he returns to the front line. Not long after this the film ends with his pointless needless death. A strong message which we all know of now yet at the time people just didn't understand or realise, war was glorious and made men of the young.

A classic anti war film, All Quiet on the Western Front is a masterwork of filmmaking. Over 80 years after its release, the film is still very effective, and ranks among the genres finest works. With stunning performances from its cast, the film occur during the First World War, and it shows us the chaos, and considering the fact that this was made in 1930, it's an impressive feat in filmmaking, as what we have here is a picture that captures the fear and agony of combat, and it's a well made movie for its time, and it still looks great after all these years. What stands out with the film is the superb direction from director Lewis Milestone, who captures every moment on camera and does so in away where you're plunged directly into the action and terror of the war. War films are always tricky to do, a lot of them inaccurate, overdone, and it lacks the effectiveness of capturing War carnage on camera by overdoing IT. However here, since this was made in the early days of cinema, All Quiet on the Western Front delivers a straight to the point story with subtlety and it is an engaging and captivating viewing experience. This film is the definitive WWI picture, with great direction, well done effects and memorable performances, this one gets it right. The film does a fine job at presenting the facts, and with that being said, it's a genre classic that is a must watch for war or history enthusiasts,. The film's message really sets this film apart. With the way that it tackles its subject, All Quiet on the Western Front gives you that anti war message without overdoing anything, and that's what's great about this. This is a movie that is horrifying in the way that shows young men torn apart by the horrors of war, but it does so in a very tasteful way. Remember that the war to end all war ended in 1918, and this picture was made 12 years later, still fresh in people's minds. This is a flawless picture, one that stands among the most powerful genre pictures ever made as well as a defining cinematic accomplishment.

A group of German schoolboys enlists to serve in the Great War. As vital, disturbing, and powerful now as it was when it was written and filmed, All Quiet on the Western Front is an excellent film about war and both its inhumanity -- the moments when people are turned into monsters and pawns -- and its humanity -- the moments when despite the contexts people attempt to regain their decency. Very few war films are able to conflate so much of war's aspects. The film also serves as a visual representation of much of the poetry that came out of WWI. "Dulce et Decorum Est" by Wilfred Owen and Siegfried Sassoon's poems are reminiscent of this film, or vice versa. I particularly liked the scene in which soldiers, one of them pretending to be the kaiser, debate the necessities of war in a conversation that is wise in its simplicity. The final scene get a little maudlin; there's a line where a film deserves its sentimentality, I think this film dances around it. Overall, this is a profoundly effective war film that rivals anything current.

All Quiet on the Western Front is probably the most truthful and one of the best war films of all time, and a true tear jerker.

All Quiet on the Western Front Quotes