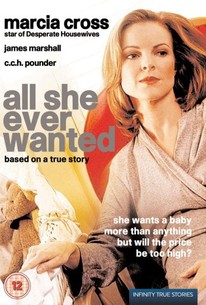 Per the title of this made-for-TV drama, all Rachel Stockman (played by future "Desperate Housewife" Marcia Cross) has ever wanted is to bear children. Unfortunately, Rachel suffers from a bipolar disorder, requiring her to take lithium, which thus far has prevented her from becoming pregnant. In desperation, Rachel discontinues her medication, and before long she is "with child." She is also undergoing severe and horrifying mood swings, leading to confinement in a hospital--and ultimately a competency hearing that will determine whether or not she can be legally obliged to take lithium...and to terminate her pregnancy. All She Ever Wanted originally aired April 14, 1996, on ABC. ~ Hal Erickson, Rovi

Tyler Kuhn
as Jimmy
View All

Critic Reviews for All She Ever Wanted

There are no critic reviews yet for All She Ever Wanted. Keep checking Rotten Tomatoes for updates!

There are no featured reviews for All She Ever Wanted at this time.

All She Ever Wanted Quotes