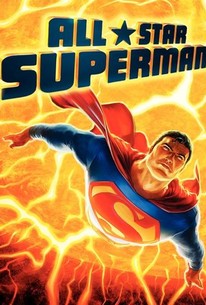 This animated adventure finds the ultimate superhero Superman succumbing to the clutches of disturbed criminal mastermind Lex Luthor, who has constructed a plan to murder the Man of Steel with solar radiation. Following his exposure to the deadly phenomenon, Superman is sure he only has weeks to live, and lays plans to make good on the many tasks that ahead of him before he expires -- including telling the truth about his secret identity to Lois Lane, and defeating Lex once and for all. But is the hero's fate truly sealed, or can he appeal the fatal sentence and live to fight once more?

Arnold Vosloo
as Bar-El
View All

A very good idea gets overwhelmed by an apparent need to throw in everything but the kitchen sink.

Turns that Jimmy Olson is a drag queen - who could have thought?

While the 2011 movie is short in the tooth, it is absolutely satisfying...

A Superman story outside of the canon that still uses most of the known elements of the character. It's big and audacious, and they truly throw in everything but the kitchen sink, often so much so as to dilute the intent. Nonetheless, a satisfying outing for Man of Steel fans.

Media seems obsessed with the death of Superman. He had a death in live-action film, Superman Returns, a death in Superman Doomsday and now another death in the animated adaptation of Grant Morrison's All-Star Superman comic book. The animated movie is a different version of the Superman character, much like the comics. The movie starts off with him realizing that he's dying and that Lex Luthor killed him. James Denton's Superman/Clark Kent is possibly the most lovable incarnation second only to Christopher Reeves's live-action portrayal. The loyal script and top notch acting imbues Superman with just the right level of noble superhuman grandeur mixed with a down to earth homely touch. He is the hero, and the farm boy at the same time. Similarly, Clark Kent's oafish demeanor is comedic yet sincere; his interview with Lex Luthor and subsequent escape from the prison riot caused by a supervillian's escape is possibly the most fun part of the entire movie.

"Doomed planet. Desperate scientists. Last hope. Kindly couple. Superman." Lex Luthor enacts his plan to rid the world of Superman, once and for all. Succeeding with solar radiation poisoning, the Man of Steel is slowly dying. With what little times remains, the Last Son of Krypton must confront the revealing of his secret identity to Lois Lane and face Luthor in a final battle.

REVIEW
I'm torn on All-Star Superman. There's too much going on, there are characters and plot elements which seem to serve no purpose, and despite the epic romanticism of the movie's ultimate destination - which does work on some levels - I did not come away entirely satisfied. And yet, I can't deny that I mostly enjoyed watching it, and that some moments were quite poignant. I'm not knowledgeable enough to judge the art and animation on an objective level, but I quite liked the look of the movie, and I found the voice acting unnoticeable in the best sense, which is to say it was perfectly convincing. The music, too, was good. It's just the plot, really, where All-Star Superman loses points. But then, what's more important to a story than plot? Basically, I'd recommend this for fans, but probably not for the casual viewer. And I have a strong feeling that I would have been better off reading the comics version of this story.

I think this movie was good but better stories have been made and better animation, I enjoyed it nevertheless. Great imagination the creators have. All-Star Superman begins with a frantic rescue mission near the surface of the sun. You think Superman saved the day, and I suppose he did, but it ends up it was part of an elaborate scheme by Lex Luthor to finally kill Superman. It worked. Superman quickly learns that exposure to solar radiation has increased his powers, but will soon lead to his death. The movie then takes an odd turn into Superman's "bucket list," more or less, as he checks off a bunch of things he always wanted to do, some of which involve giving Lois Lane super powers for a day. This part of the movie is disjointed, seeming to hop from scene to scene with no real connection to anything else. The entire second act could've been shuffled into a different order and would've made the same amount of sense. There was also this weird segment with Atlas and Samson that seemed to be in the movie specifically to make Lois Lane look like the worst girlfriend in the world. It's certainly possible I'm missing a story arc with Atlas and Samson that wasn't explained in the movie, but it did add to the pointlessness of what was going on. Thankfully, once the focus shifts to the confrontation between the dying Superman and his killer, Lex Luthor, All-Star Superman makes a confident shift into poignant story telling. These two know each other so well that it's hard to discern throughout who's really outplaying the other. And when the battle resolves, it does so in a way that perfectly embodies who Superman is and how we view him. At the end, then, I felt satisfied with All-Star Superman despite the meandering middle and some of the cheesiest dialogue imaginable outside the pages of a comic book. For a guy with only a passing interest in Superman and super heroes, All-Star Superman was an okay way to kill an evening. Some tighter writing and better plot decisions would've saved the entire second act from becoming a pointless trip into Superman's bucket list, but it still kind of works if you approach it with a sense of humor. (My wife and I didn't have good answers for when our daughter kept asking us, "Why are you laughing?") But the build-up to the confrontation with Lex Luthor is very well-executed, and the resolution is ultimately satisfying.