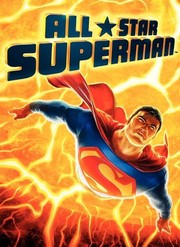 David S
½ May 9, 2021
This Superman story has good animation, but a completely overloaded story to show how a Superman that is dying lives out his final weeks.

Garrett D
January 25, 2019
Does an adequate job at adapting one of the best Superman stories of all time. I would of liked a little more attention dedicated towards the animation. The charm of the comic comes out here, but there's a lot they left out making this feature feel constricted in the story it can tell. Unfortunately it takes the safe route in most cases leaving some of the best of what this story has to offer on the pages. Still a very fun ride in the impressive DC Animated film collection.

Paul D
June 2, 2018
This movie does tend to go all over the place, but it still entertained me quite a bit. It isn't the best of the animated Superman films, but it is still worth your time if you like these things.

Henry B
½ January 30, 2018
A bastardisation of one of the greatest comics of all time. It is possible that being a big fan of the comic infinitely ruined this for me but knowing how great it could've been this film is just a pure disappointment. From changing half the lines, cutting some of the best bits, adding COMPLETELY UNNECESSARY sections and all in all completely destroying one of the best depictions of superman and in general best stories ever this film was painful to watch.
Of course this is from the perspective of having read the comic. I'm sure this film might work to some degree for those who haven't read it and the animation is decent, it's not groundbreaking but it's nice, and from what I've briefly gleaned from over reviews it seems some of the good things from the comic did shine through but it just so sickingly disappointing that they were given truly brilliant source material and just decided to crap on it. I'm honestly just shocked they couldn't just make a perfect and memorable adaptation as opposed to this crap they settled for.

Super Reviewer
Kevin M. W
January 29, 2018
A Superman story outside of the canon that still uses most of the known elements of the character. It's big and audacious, and they truly throw in everything but the kitchen sink, often so much so as to dilute the intent. Nonetheless, a satisfying outing for Man of Steel fans.

December 14, 2017
This is by far the best Superman ever made. We often get to watch a superhero's Origin story, their journey towards selfless service for others. Grant Morrison's All-Star Superman kicked off every rule to give us the final chapter to Superman's legacy.

hammers9025 P
½ August 11, 2017
Quite a decent animated superman film, plenty of action and nice looking animation. This film had too many subplots and got all a bit too much at times and was a bit confusing in parts. However the finale made up for it, not the best dc animated film in the series but it was still a decent addition as superman as the lead role.

Matthew D
July 26, 2017
A brilliant distillation of the comic and translation to the screen, tweaking and streamlining without butchering. It's a bit breathless trying to cover so much of Superman's mythology in so short a time, slightly more would have improved clarity and strengthened the best moments, but it very much respects all aspects of the character. The man of steel's best movie so far (animated or live-action) is funny, thrilling, inspiring and haunting.

Super Reviewer
Jamie C
May 4, 2017
Although the story was a good idea it's just very boring until the ending fights even then they're not great, Superman's animated struggle continues I'm afraid.

Super Reviewer
Gimly M
November 20, 2016
A host of competing plotlines and subpar animation, but it's nice to see a character-driven DC Animated Film.

Mayank A
½ August 19, 2016
While the movie was enjoyable felt there were too many characters and plots brewing, a person like me who is without the Superman comic background felt lost. On the good side the main plot was just brilliant, loved the ending. Some other story's and subplot felt so out of character for Superman, him being mean, him being a romantic, him being so caring for Lex Luthor !!! Still it's a fun watch for the fans.

Zac E
½ May 8, 2016
Superman is almost the source of controversy currently, with films like Man of Steel bringing up modest reviews and Batman v. Superman showing a cluttered mess. There are, however, good Superman movies. All Star Superman is no acceptation. Based on the 12 issue story of the same name, Superman is faced with many challenges before he dies. Some of these challenges include answering the impossible question to fighting Lex Luthor what has all of his powers. It shows the growth of a character that needs to be shown and more aware to the general public. If you haven't see this movie, you are defiantly missing out.

Rasheed T
August 11, 2015
Visually appealing and excellence story nevertheless. A reminder on why Superman is truly a superhero to be recognized!

Nasko M
May 15, 2015
The movie is more about Superman dying, than it is the action and suspense in it, which makes it tedious in some respects, however the Man of Steel having to inevitably face his own mortality gives way to some pretty interesting moments. Such as him restoring the Titanic (or some random ship in his Fortress). This is a movie that gets you thinking about death and how precious life really is, especially when you see Superman having to face that fact himself. Yes he has died before, but most of the time it's under abrupt circumstances like in Doomsday and we never really get to see much other than a very moving funereal like in Justice League (the series), which was done incredibly well. But this one is different because he actually has time to contemplate the fact that he's dying, making this a new experience. He does what most people do when they find out they're dying. He reveals his identity Lois and tries to spend more time with her, he takes the Bottle City of Candor to a new inhabitable planet and even manages to teach Lex Luther not to be a prick anymore. The movie is basically him tying up loose ends before his time comes. It's not perfect, the atmosphere is very "Meh" and you never really feel all that thrilled about things, but it does have a lot of heart so that makes it a win in my book.

Abdullah A
March 31, 2015
I have to say this is the best Superman portrayal I've ever seen and a very emotional one too. Really. I was left speechless at the end. This is how Superman is and should be. Towards the end, I was getting emotional. Just for that alone, I'm giving it a 5 out of 5.
Now, some may complain that there were too many characters, but THAT'S HOW IT SHOULD BE! Were there beings like this in the world, that's probably how things would go.
Also a really great portrayal of Superman as Clark Kent, and fun to see how he switches between the two in some scenes.
The animation is well, done, though at times, I felt like the detail was a bit off, and if we were really to hit it home, the animation might've had more of an impact, but that's not taking away anything from the movie for me.
Voices were also really well done, especially Superman's, because it makes him seem a lot more like a hero with the gentle, calm voice, and Luthor a vain intelligent evil man (as well as other characters who the read should find out for himself).
The interaction between Superman and Lex Luthor when they did happen were also really well done and intriguing.
Part of the emotional impact this movie had was the real feeling of heroism you felt from Superman - like I said, how Superman should be. And of course, the ending, which had so many things to it that were emotional, from pretty much every single character in the movie (like seriously! even one of the robots!) So yeah, definite 5/5 from me and the best Superman movie I've ever seen so far.

Nik M
March 4, 2015
Satisfyingly mellow and subtle, this adaptation if faithful and somber. It reflects and contemplates as well as entertains.
Page 1 of 18