All That Heaven Allows1955 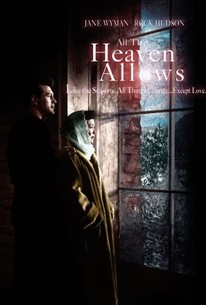 All That Heaven Allows Photos

One of director Douglas Sirk's best and most successful romantic soapers of the 1950s, All That Heaven Allows is predicated on a May-December romance. The difference here is that the woman, attractive widow Cary Scott (Jane Wyman), is considerably older than the man, handsome gardener-landscaper Ron Kirby (Rock Hudson). Sirk builds up sympathy for Cary by showing how empty her life has been since her husband's death, even suggesting that the marriage itself was no picnic. Throwing conventionial behavior to the winds and facing social ostracism, Cary pursues her romance with Ron, who is unjustly perceived as a fortune-hunter by Cary's friends and family--especially her priggish son Ned (William Reynolds). Amusingly, Conrad Nagel was to have had a much larger part as Harvey, an elderly widower who carries a torch for Cary, but his role was trimmed down during previews when audiences disapproved of an implicit romance between a sixtyish man and a fortysomething woman! All That Heaven Allows was remade by unabashed Douglas Sirk admirer Rainer Werner Fassbinder as Ali--Fear Eats the Soul (1974), in which the age gap between hero and heroine was even wider. ~ Hal Erickson, Rovi

Critic Reviews for All That Heaven Allows

Romance novel in narrative this transcends its genre with visual depth and perceptive socio-cultural insights.

Hudson is handsome and somewhat wooden. Laconic of speech, and imbued with an angel's patience and understanding, it's at times hard to understand his passion for the widow, what with pretty girls just spoilingfor his attention.

Solid and sensible drama plainly had to give way to outright emotional bulldozing and a paving of easy clichés.

Beneath the stunningly lovely visuals -- all expressionist colours, reflections, and frames-within-frames, used to produce a precise symbolism -- lies a kernel of terrifying despair

A masterpiece (1955) by one of the most inventive and recondite directors ever to work in Hollywood, Douglas Sirk.

A potent story for the ages.

The glorious gift of All That Heaven Allows is Sirk in top form, one of his shining examples of life's wicked parodies.

Strongly slanted to ring the bell with soap-opera fans, but otherwise of limited appeal.

As the camera gradually moves in on Cary's despairing face in reflection, we know the mantra of "life's parade at your fingertips" is really a mandate for her own imprisonment

Works as a straightforward melodrama, but is so meticulously crafted by a visual master that it provides endless material for those who wish to mine for deeper social commentary.

Proof that there is artistry and glory in a genre that never had to apologise for itself, not when it was this confident, beautiful, and good.

Sirk benefited immeasurably from the fact that the chief subject of his crazy cinema was postwar America.

Audience Reviews for All That Heaven Allows

Despite the fact that the two characters seem to fall in love in such an abrupt way, this is still an involving silky melodrama whose appeal is not hard to understand, especially taking into account the impressive social criticism that made it so ahead of its time.

I don't quite know how to describe this. I watched it expecting nothing great and I still feel quite confused as to my feelings on it but I really enjoyed it. It was interesting and understandable (not always common in 'old' movies) and it touches on themes I can completely understand despite the age gap. I feel I may have liked it better at Christmas time, as the beautiful images of a snow covered cottage with a young deer outside was magical. I truly felt for Cary, as her whole world changed and ended up feeling satisfied at the end. A good romance.

Some people never realize how society, traditions and values imprisons and forces them to conform with banality. A candid and romantic look of a taboo relationship, done with such picturesque beauty that is hard not to be moved and enchanted by it.

One of the cheesiest, yet one of the most beautiful romance films I have ever seen. This film tells the tale of an older woman, as her family is not as happy as they used to be before their father (her husband) passed away. As she begins to fall for their family gardener (Ron), he does whatever he possibly can to get her to love him back. He is far to young of a man for her, but that is not a factor that will stop this beautifully told romance from ending. There are moments where the dialogue is too corny to not chuckle at it, but the heart behind it is magnificent, and even in the final moments of the film, you still share all the feelings that you shared since their first on-screen presence. "All That Heaven Allows" is one of the best romance films ever made. It has charm, happiness, force, love, and the will to not let anything get in the way of romance. As it seems the romance is tearing the family apart and Ron is not being accepted into the family, it just makes the audience have more faith in life that it will all get better. This film is blissful!

All That Heaven Allows Quotes