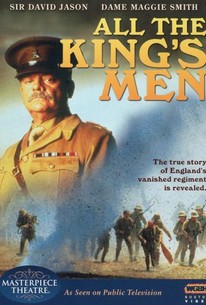 All the King's Men Photos

Originally produced for the BBC and broadcast in the U.S. as part of the PBS series Masterpiece Theatre, this drama tells the story of the Sandringham Company, one of the most unusual teams of fighting men to march on the battlefields of World War I; under the leadership of Captain Frank Beck, the Sandringhams were made up entirely of servants and custodians from the Norfolk estate of King George V. Hoping to serve their king in a time of need, they volunteered for military service and were sent into battle against Turkish forces in 1915's infamous Battle of Gallipoli, during which they disappeared and were never seen again. David Jason plays Capt. Beck, David Troughton portrays George V, and Maggie Smith appears as Queen Alexandra, an ardent supporter of the Sandringham battalion.

Critic Reviews for All the King's Men

None of this would work as beautifully as it does if we didn't believe in Maggie Smith as a Queen Mother worth cherishing...besides waste, there is honor in these two hours.

... beyond the well-known news that war can be hell on the battlefield and at home, this story just doesn't have much punch or point.

Audience Reviews for All the King's Men

Well made drama of a sad episode in the WWI. Too tragic to be termed enjoyable but worthwhile viewing with excellent performances.

All the King's Men Quotes