All the Pretty Horses2000 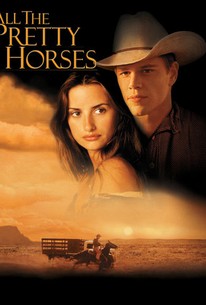 Critics Consensus: This adaptation of Cormac McCarthy's novel comes off as rather flat and uninvolving. Scenes feel rushed and done in shorthand, and the romance between Damon and Cruz has no sparks.

Critics Consensus: This adaptation of Cormac McCarthy's novel comes off as rather flat and uninvolving. Scenes feel rushed and done in shorthand, and the romance between Damon and Cruz has no sparks.

Critic Consensus: This adaptation of Cormac McCarthy's novel comes off as rather flat and uninvolving. Scenes feel rushed and done in shorthand, and the romance between Damon and Cruz has no sparks.

All the Pretty Horses Photos

Texas teenager John Grady Cole finds himself alone in the world after his mother sells the ranch where he grew up, forcing him to leave the only life he has ever known. Joined by his pal Lacey Rawlins, John Grady sets off on horseback for Mexico where the cowboy life still exists. On their way south, the two precocious horsemen encounter a variety of adventures, pick up a sidekick-a 13-year-old misfit named Blevins-and eventually arrive at a hacienda where they are hired to break horses. There, John Grady falls into an ill-fated romance with Alejandra, the beautiful daughter of a wealthy ranch owner. It is a disaster that leads to arrest, Mexican jail and a murder in self-defense-and ultimately proves to be John Grady's greatest test of maturity and manhood.

Brian Orr
as Man at Car

Critic Reviews for All the Pretty Horses

McCarthy's novel employs the coming of age narrative in service of his sanguineous spiritual vision, and for the film to renounce that philosophy is to give up its soul and be rendered lifeless.

Lovely but disengaging, mysterious but uninvolving, physical but strangely remote.

Whether you're familiar with the story or not, you'll have trouble feeling connected to it.

Feels at once too slow and yet oddly truncated.

Lacks an essential sense of purpose.

What is on screen is impressive, even with the sense of something missing.

If Thornton had cut a few extra minutes' worth of pretty horses ... and left in a few more storytelling scenes, this attempt at a Western epic might have had more impact.

Not a disaster as rumored to be, just a disappointing adaptation of a great novel. Thonrton fails to dramatize in visually or dramatically satisfying ways the hero's odyssey from innocence to experience, from childish game to acting with honor.

I'm a fan of all involved, but this is a really tough watch.

The movie that resulted from the studio's demand for cuts ... is a big-screen Cliff's Notes for the novel.

Despite a script which remains faithful to the sparse language of the novel, and some breathtaking cinematography, the whole production feels too lethargic.

Audience Reviews for All the Pretty Horses

An ok film overall. Great aesthetics but the narrative wasn't really shown too well. I'll have to read the book and find out if that's McCarthys fault or the makers of this film. It had hints of a summer romance film but didn't quite get there which is a shame since performances were good.

I thought that this was a really good movie, despite alot of bad reviews. I say this even though I am not a Penelope Cruz fan, but I AM a Matt Damon fan...so this probably helped my opinion. I think that he did a fantastic job. I thought that this was going to be primarily a love story, but it was so much more than that.

Not really a western but a way of life. This is a graet flix, Matt plays an excellent part, not sure why I missed it when it was in the theathers. Worth adding to your collection

I liked the scenes when they are sent to a harsh Mexican prison. The romantic storyline didn't interest me too much.

All the Pretty Horses Quotes