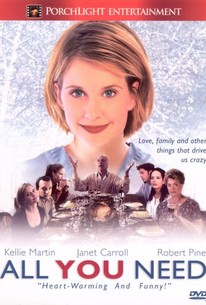 All You Need Photos

One family's dysfunctional nature begins to rise to the surface in this independent drama. The Sabistan family would appear to have it made; Earl (Robert Pine) and Jane (Janet Carroll) have had a long and seemingly happy marriage, and their three grown daughters -- Beth (Kellie Martin), Missy (Amy Raymond), and Faran (Kayren Ann Butler) -- have found success in their respective careers. But when they all gather together to celebrate Thanksgiving, Earl drops a bombshell on his family; he announces he's no longer happy with Jane and has decided to file for divorce. The surprise announcement forces Jane to reveal a secret of her own -- that she's developed a serious drinking problem. As Beth tries to make sense of all this, she discovers that her sisters have been keeping quiet about problems of their own; Missy's marriage to Todd (Jeff Robert Werner) is falling apart now that he's no longer attracted to her, and Faran has reason to believe that her spouse Roger (Chris Shea) is having an affair. All You Need was the first feature for director Randy Ser.

Critic Reviews for All You Need

The picture manages to pack much more of an emotional wallop that you initially suspect.

There are no featured reviews for All You Need at this time.

All You Need Quotes