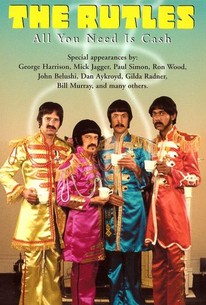 All You Need Is Cash Photos

A mockumentary that spoofs the career of The Beatles.

George Harrison
as The Interviewer

Jeannette Charles
as Queen of England

Carinthia West
as The Bigamy Sisters

Bunny May
as Journalist

Mick Jagger
as Himself

Paul Simon
as Himself
View All

Critic Reviews for All You Need Is Cash

! have forgotten the whole show effortlessly. However, I have a faithful... notebook which rescues me in such quandaries and it says here "he wore swimming trunks in the bath to stop him looking down on the unemployed." Oh, now I remember why I forgot.

Dated and only intermittently amusing.

...the original mockumentry, a funny, feature-length comedy that features both subject and parodists in perfect harmony...

Many sequences are modeled closely on news footage of key events in The Beatles' much-documented career, and the overall effect is so close to reality that it's downright eerie.

One to help you reminisce over a hot cup of cocoa.

A modestly amusing Pythonesque riff on the Beatles phenomenon.

If you've never heard of the Rutles, you'll be astounded to discover all they gave to the world of entertainment... and the realm of snarky, witty comedy.

Audience Reviews for All You Need Is Cash

Unique satire of The Beatles.

A hilarious all star spoof of the Beatles movies and image in general. If you're a fan of the Beatles and/or of Monty Python and Saturday Night Live type shows, you will love this movie.

Funny movie! It makes a joke of the Beatles perfectly. "Rutles" is a dumb name for a band. I like their cheap songs which throw fun at the originals.

All You Need Is Cash Quotes