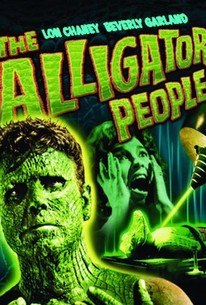 A confused horror yarn set in the Deep South, Alligator People stars Richard Crane as a husband who becomes accidently separated from his new wife (Beverly Garland) during a train ride. She tracks him down to the swamplands surrounding his family mansion. Her reunion with her husband is tarnished by the fact that he's been partially transformed into an alligator! This is the handiwork of doctor George MacReady, who's been conducting curious experiments with gators and humans. Garland must figure out a way to save her mutated husband from both the scientist and a drunken alligator hunter (Lon Chaney Jr.). The story is told in flashback, as psychiatrists try to figure out what has driven Garland insane. The Alligator People was the last film directed by Roy Del Ruth, light years away from his glory days at Warner Bros.

John Merrick
as Nurse No. 1

Critic Reviews for The Alligator People

Screams and explosions ensue, and no movie was ever harmed by having a Lon Chaney on board.

A sci-fi/horror film that refuses to be anything but unbelievable.

Audience Reviews for The Alligator People

This is a very strange movie, part mystery, part horror, and part horrible movie. I wouldn't recommend it, but it's an interesting B-movie anyway.