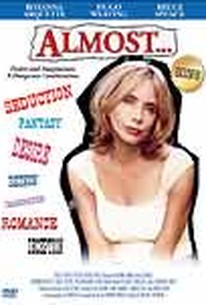 Originally released in Australia as Wendy Cracked a Walnut, Almost made it to American shores in 1991, nearly five years after its completion. Rosanna Arquette plays Wendy, whose notions of life have been formed by romance novels. On her tenth wedding anniversary, Wendy hopes that her neglectful husband Ronnie (Bruce Spence) will rekindle his premarital ardor. While Ronnie is delayed by circumstances beyond his control (including a bolt of lightning), Wendy makes the acquaintance of handsome stranger Jake (Hugo Weaving). Convinced that Ronnie is cheating on her, Wendy decides to fight fire with fire by running off with Jake-just like in one of her Harlequin Romances. Ronnie tries his best (which is none too good) to win his wife back, leading to an archly whimsical finale. ~ Hal Erickson, Rovi

There are no critic reviews yet for Almost. Keep checking Rotten Tomatoes for updates!

There are no featured reviews for Almost at this time.