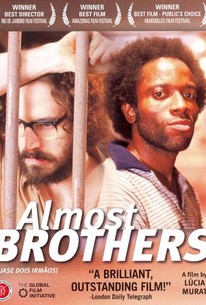 A lifelong friendship between two men forces them to examine how different their lives have become, and how different their perceptions of the world around them are, in this drama from filmmaker Lúcia Murat. Miguel and Jorge first met when they were children growing up in Brazil in the late '50s; Miguel's dad was a passionate music fan who was interested in the work of Jorge's father, a gifted samba composer and musician. While Miguel and Jorge became fast friends, as they grew older the fact that Miguel came from a wealthy white family while Jorge's parents were black and significantly less privileged began to make a greater impact in their lives, and as the two men move into middle age, Miguel (Werner Schüneman) is a successful politician and Jorge (Antonio Pompeo) is a high-level drug dealer who still controls street traffic from his prison. Miguel approaches his old friend asking for help with a proposal that would combat gang violence in Brazil's ghettoes, but Jorge is puzzled by the naïveté of his plan; meanwhile, Miguel and Jorge's worlds begin to overlap in another way when Miguel's teenaged daughter (Maria Flor) begins hanging out with dealers from Jorge's crew. Quase Dois Irmãos (aka Almost Brothers) received its North American premiere at the 2004 Toronto Film Festival.

Caco Ciocler
as Miguel at 70

Flavio Bauraqui
as Jorginho at 70

Brunno Abrahão
as Miguel as a Child

Pablo Ricardo Belo
as Jorge as a Child

Jefchander Lucas
as Boy from Favela

Tonico Pereira
as Head of Prison

Director Murat reveals how her country's epidemic of violent, drug-selling street gangs got their start in those fetid jail cells. A hard look at a vibrant if scary culture...

'Almost Brothers' tells a good story and tells it well.

There are no featured reviews for Almost Brothers at this time.