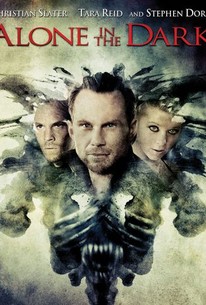 Critics Consensus: Inept on almost every level, Alone in the Dark may not work as a thriller, but it's good for some head-slapping, incredulous laughter.

Critics Consensus: Inept on almost every level, Alone in the Dark may not work as a thriller, but it's good for some head-slapping, incredulous laughter.

Critic Consensus: Inept on almost every level, Alone in the Dark may not work as a thriller, but it's good for some head-slapping, incredulous laughter.

Alone in the Dark Photos

Edward Carnby is a private investigator specializing in unexplainable supernatural phenomena. His cases delve into the dark corners of the world, searching for truth in the occult remnants of ancient civilizations. Now, the greatest mystery of his past is about to become the most dangerous case he has ever faced. With the help of his ex-flame, archeologist Aline Cedrac, and his bitter rival, government agent Richard Burke, Edward Carnby is about to learn that just because you don't believe in something, that doesn't mean it can't kill you.

Will Sanderson
as Agent Miles

News & Interviews for Alone in the Dark

View All Alone in the Dark News

Critic Reviews for Alone in the Dark

Stupid horror movie based on an Atari game.

Beware the film that confuses before it even begins.

Christian Slater and Stephen Dorff, the reigning princes of Hollywood schlock, join forces in this brain-dead adaptation of a popular video game.

Any chance for suspense is thwarted by gratuitous violence, heavy-metal-propelled action sequences and laughably flat dialogue between characters who are barely more developed than in the Atari version.

It's just the most inept filmmaking you can catch in theatres right now, or probably all year long.

A violent and incomprehensible piece of gibberish.

How do you savage something this pathetic, this completely unbothered by the basic concept of passable composition?

Who needs plot when you have plenty of bullets and heavy metal.

Don't watch Alone in the Dark. Not even as a joke. It's eighty minutes that absolutely no one can give you back. [Full review in Spanish]

Lame monster movies like this adaptation of the popular Atari video game are scary for all the wrong reasons.

The late Gene Siskel once devised a simple method of measuring a film's worth: 'Is this film more interesting than a documentary of the same actors having lunch?' 'Alone in the Dark' doesn't come close to matching that standard.

Audience Reviews for Alone in the Dark

A godawful, incomprehensible schlock that can't make itself understood even with that endless, gigantic text crawl that opens it, and I don't believe no one realized that Tara Reid can't convince as someone who would open the door of a museum, let alone be an archaeologist.

Alone in the Dark is Uwe Boll's worst, if that's even possible. Alone in the Dark is very bad, with bad acting, story and directing. The film stumbles around trying to find a purpose, but it never elevates to anything remotely good or creative. Action scenes are sloppy, too noisy and not well done. Equally bad is Tara Reid. This is a film that fails to hit the mark on so many levels, it's not even possible to salvage even if you'd remove all the crap scenes with Tara Reid. Alone in the Dark is a misguided attempt at creating an action Horror film, and it fails. This is one film that just doesn't deliver. You end up wondering why this film wasf8inanced in the first place and you're astounded at how Boll could pull something like this off. Alone in the Dark is the prime example as to why Video game to screen adaptations are horrible ideas for films, and they rarely work. Alone in the Dark is a poorly made film and you realize that Uwe Boll doesn't care about directing a good film that he's only in the business for the money. His films sell, so there's no reason for him to direct a good film, although he's managed to make three good flick s out of the fifteen or so he's made. This might have been an interesting idea for a film if it would have been handled properly. There were signs of potential, but it quickly became apparent that it was a pure joke fest. Everything that might have been interesting is wasted from the poorly conceived script, which feels rushed, with no heart put into its story to the washed up actors; this film was set to fail right before the cameras were set to roll. Avoid this horror flick, as it a mess from start to finish, and there's nothing good to come out of it aside from the heavy metal soundtrack.

This is really bad, nothing like the games at all. Has some well known faces and the opening 10mins are pretty good with some cool SFX. After that though it becomes an Aliens rip off that is no where near as good!

Alone in the Dark Quotes