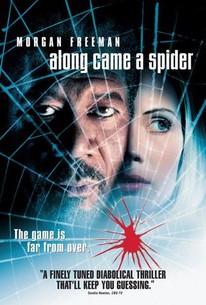 Critics Consensus: Derivative and contains too many implausible situations.

Critics Consensus: Derivative and contains too many implausible situations.

Critic Consensus: Derivative and contains too many implausible situations.

Along Came a Spider Videos

Along Came a Spider Photos

Morgan Freeman returns as forensic psychologist Dr. Alex Cross in this thriller based on the novel by James Patterson (whose work also formed the basis of the hit Kiss the Girls). Gary Soneji (Michael Wincott) is a brilliant but remorseless psychopath who has landed a teaching position at an exclusive private school in Washington, D.C. Using his extensive knowledge of kidnapping (he's taught a class on Charles Lindbergh), Soneji abducts one of his students - Megan (Mika Boorem), whose father Hank Rose (Michael Moriarty) is a United States senator. Ollie MacArthur (Dylan Baker), the detective investigating the case, has strong words for Jezzie Flannigan (Monica Potter), the Secret Service agent who mistakenly let Megan slip through her fingers. But when the kidnapper contacts Dr. Cross, the psychologist is brought in on the case, and Cross seeks out Flannigan, who he believes might have a valuable insight into the case. Soon, Cross and Flannigan come to the terrible realization that this crime only represents the tip of the iceberg for the ruthless Soneji. Along Came a Spider also features Penelope Ann Miller, Jay O. Sanders, and Kim Hawthorne. ~ Mark Deming, Rovi

Scott Heindl
as Floyd the Fisherman

Carter Jahncke
as Man Who Can't Answer Phone at Station

Jim Hild
as Potentially Evil Guy on Train
View All

News & Interviews for Along Came a Spider

View All Along Came a Spider News

Critic Reviews for Along Came a Spider

Even at half speed, Freeman excels: He knows how to whip out his badge at a crime scene and make it seem as if he had been doing it his whole life.

There are popcorn movies, and then there are movies like this one, which, by its conclusion, make you want to toss your empty popcorn bag at the screen.

In terms of plotting, it's hardly breaking new ground, but spare a thought nonetheless for Morgan Freeman.

Freeman always gives good value and the result is never less than watchable.

Like a paperback plucked from a counter at an airport, Spider is an impulse buy of a film, a time killer that will neither tax your brain nor challenge your memory.

What makes this series of films, based on James Patterson's novels, more effective than other run-of-the-mill thrillers is Morgan Freeman.

A thriller that ended the possibilities for Morgan Freeman as an unlikely star of a great franchise. [Full review in Spanish]

I don't begrudge Freeman his own hero-man franchise, but I wish the movies worked harder to be worthy of him.

I felt like I was kidnapped and forced to watch this drek as punishment.

Audience Reviews for Along Came a Spider

Alex: To be brutally honest, I think you have a morbid desire to burn in hell. "The game is far from over." Overall, Along Came a Spider is a average mystery thriller at best. The film is twisty, but not smart twisty; just twisty. Twists are something that, if used intelligently can add a lot to a film. They also can make decent movies bad, and bad movies unbearable. In Along Came a Spider's case; the twists didn't really elevate the movie, nor did they take away from it. If anything the lackluster twists fit in really well with everything else that was taking place.  This follows a detective named Alex Cross, who gets a phone call from a man who just kidnapped a senators daughter. The kidnapper posed as a teacher at a prep school and snatched the girl one day, while the secret service was just late in catching him. A secret service member who worked at the school becomes Cross's partner as they try to piece together the kidnapper's motives and also where the girl is.  There's no way to describe this movie other then saying it is a generic detective mystery. There's nothing new and exciting, but it is a decent time filler. The movie runs pretty smoothly and time passes at a good pace, but there's a lot missing to make this a truly good film. Morgan Freeman is good as Cross and does help the movie flow a lot better, though. In the end, I would disregard saying whether to watch this one or not. If you have nothing better to do on a boring afternoon and come across it, it's worth a look. If you never come across it, you also won't be missing much. It's not a must see, but if you do, you also won't be overly angered that this was how you spent your 100 minutes.

Good thriller with a good cast. A congressman's daughter is kidnapped for ransom. A forensic psychologist seeks out the kidnapper and girl. Interesting twist at the end.

Good acting from Freeman and Yelchin but that's pretty much the only good thing in this! Badly thought out film with a horribly predictive plot. Potter's performance was absolutely awful. Ending was plain and I did get the feeling that I was watching a sequel which I now know was part of a book series. I don't know if the book was as bad as this but if it was, the producer needs to be fired.

Along Came a Spider Quotes