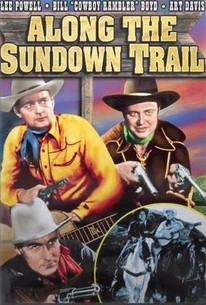 PRC's shoddy Frontier Marshal series came to a merciful end with this below-average Western starring radio personalities Bill "Cowboy Rambler" Boyd and Art Davis and former serial ace Lee Powell. They come to the aid of miner Pop Lawrence (Karl Hackett) and his daughter, Susan (Julie Duncan), whose foreman (Jack Ingram) is stealing tungsten ore on behalf of saloon proprietor Big Ben Salter (Charles King). Pop's son and heir, Joe (Howard Masters), is framed in his father's killing by the nefarious Big Ben, who wants to get his greedy hands on Susan's inheritance, the Paradise Mine. Marshal Powell and his two rather inactive sidekicks are unable to save Joe's life and the film ends on a rather downbeat note with Susan the only Lawrence left standing.

William Boyd
as Himself

Art Davis
as Himself

Lee Powell
as Himself

Al Taylor
as henchman
View All

Critic Reviews for Along the Sundown Trail

There are no critic reviews yet for Along the Sundown Trail. Keep checking Rotten Tomatoes for updates!

There are no featured reviews for Along the Sundown Trail at this time.

Along the Sundown Trail Quotes