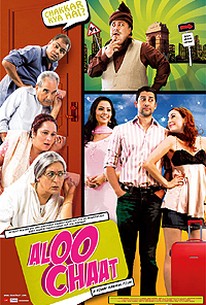 This Bollywood romantic comedy tells the story of a young man named Nikhil, who returns to his parents' home in the Punjab after graduation with a big secret: he's fallen in love with an American Muslim girl named Aamna. Knowing his devout Hindu family will never approve, Nikhil concocts a plan: he has Aamna come and visit with her Hindu friend Nikki, telling his folks that Nikki is the one he's going to marry. Then, he convinces Nikki to behave atrociously, in order to highlight all of Aamna's glowing qualities, in the hopes that they'll change their minds about their prejudices and suggest he marry the girl he really loves. The only question that remains as Nikhil sets his plan into motion is the most important one: will his plot succeed, or blow up in his face? ~ Cammila Collar, Rovi

Watch it if you like your comedy loud, obvious and heavily underscored.

There are no featured reviews for Aloo Chaat at this time.