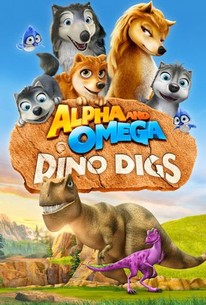 Married canine couple Humphrey and Kate, along with with their trio of puppies, meet a friendly dinosaur in this animated family adventure, which marks the sixth installment of the Alpha and Omega franchise. After a raptor named Amy comes back to life and befriends Humphrey and Kate's family, the crew realizes that the digging efforts that unearthed Amy may also bring back a T-Rex, which threatrens to endanger the world as they know it.

There are no featured audience reviews yet. Click the link below to see what others say about Alpha and Omega: Dino Digs!