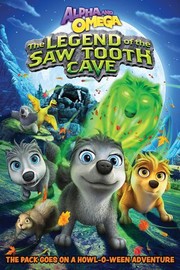 Alpha and Omega: The Legend of the Saw Tooth Cave

Alpha and Omega: The Legend of the Saw Tooth Cave Reviews

October 30, 2017
best one in the franchise. no predictable and cliched plot, animation improved, first time i actually liked Runt but then he became stupid and annoying again in the next film, humor is ok, lovable characters.

Andres A
December 20, 2015
Greatest most heartwarming movie ever

Two wolf pups are shunned by other children in the pack for being scared. To prove their bravery, they will sneak out at night and up to the legendary haunted cave of Saw Tooth. Once there, they meet a "ghost dog" that is actually a wolf that has been separated from her pack for years. The two pups will need to muster up as much bravery as possible to help their new friend.

Richard Rich, director of The Fox and the Hound, the Swan Princess 1-3, The Black Cauldron, The King and I, The Trumpet of the Swan, and Alpha and Omega 2-3, delivers Alpha and Omega: The Legend of the Saw Toothed Tavern. The storyline for this picture is very average but the animation is solid and the voices fits the characters well.

"We're not here to cause problems."

I added these films to my wish list to watch with my daughter. She was only moderately interested in this picture and wasn't as glued to it as other films in the genre. Overall, this is a below average addition to the genre and only worth watching if nothing else is on.

Duncan P
½ March 19, 2015
The first film of the series was more of a gestalt guilty pleasure than a particularly noteworthy feature, and the fact that it was turned into a franchise has had hit-and-miss results, especially with the fact that the sequels have all been thematic 45 minute direct-to-video specials aimed around a particular season/holiday/event (Christmas, the Winter Olympics, Halloween). All that being said, they've gotten better as they've gone along, and I daresay this evoked the same vibe as the first one - that is, it was something I enjoyed more than I probably should have, considering.

Spencer B
March 16, 2015
The best of the 3 sequels. This movie has a striking resemblance to the original film with its intense action scenes and heartwarming moments. I only wish it was longer than 45 minutes.

Derick W
November 19, 2014
So far this is my favorite sequel: better humor and a better, darker plot.

Eugene K
November 18, 2014
Alpha And Omega: Legend Of Sawtooth Cave was the best sequel so far. Lots of new characters (quite a few of them are wolves), well-written story for the most part and we get to see whole new sides of Humphrey and Kate's characters as husband and wife as well as mother and father.
Lilly, Eve, Tony and Winston are back while Garth is not.
Page 1 of 1