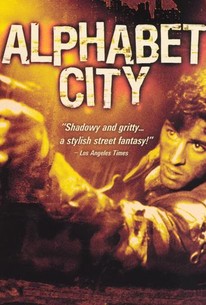 This stylishly photographed drama is set in the Lower East Side area known as "Alphabet City." There 19-year-oldJohnny has become a drug lord in charge of the neighborhood gangs and pushers. Unfortunately, he too has a boss and when he asks Johnny to burn down the tenement building that houses his mother and sister, the boy refuses and decides to go straight for the sake of his wife and child. This doesn't set well with his boss who sends gangsters out to kill him. Of course, the gangsters have to catch Johnny first. ~ Sandra Brennan, Rovi

John McCurry
as Junkie/Guard No. 1

George Kyle
as Junkie/Guard No. 2

Gary Tacon
as Junkie/Guard No. 3

Luther Rucker
as Junkie/Guard No. 4

Harry Madsen
as Hitman No. 1

Alex Stevens
as Hitman No. 2
View All

Maybe in another movie these actors could have made their characters come alive. In Alphabet City, everything is smothered in the concept.

A mostly bad drama about a city of drugs and corruption, and the dealer who wants out. It's a predictable story, it has a couple of high points at least, but overall it's not very good.