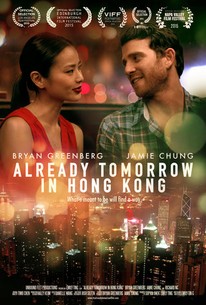 In this sparkling romance, Ruby (Jamie Chung), a Chinese American toy designer from LA, visits Hong Kong for the first time on business. Finding herself stranded, she meets Josh (Bryan Greenberg), an American expat who shows her the city. Meandering through nighttime streets pulsing with energy and possibility, they fall into a winding and carefree conversation, buoyed by an undeniable attraction. As effervescent as a perfect first date, Emily Ting's charming directorial debut takes full advantage of the chemistry of its leads, the playfulness of their exchanges, and the magical landscape that is Hong Kong at night. IT'S ALREADY TOMORROW IN HONG KONG is written and directed by Emily Ting and produced by Ting and Sophia Shek.

Emily Ting
as Woman on Phone

Josh Silfen
as Man on Phone

Noughts And Exes
as The Band

The stakes are not high enough for either character and the two-people-at-a-fork-in-the-road story never comes to life, a practically fatal flaw.

I want to see more of Jamie Chung on the big screen, and I am intrigued enough by Ting's passion for the project to be interested to see what she does next. But I'm all set with this project.

"Already Tomorrow" is about ambivalence, not gratification, and is more interesting for it.

A freshly contemporary change-up on the traditional cross-cultural romantic-comedy.

Stories don't come much thinner than the one in "Already Tomorrow in Hong Kong," a will-they-or-won't-they romance that invests a lot in the attractiveness of that city.

Jamie Chung and Bryan Greenberg ably rise to the occasion and prove to be quite compelling performers. The fact that their natural chemistry is enhanced by the fact of their being a real-life item is just the icing on the cake.

While much of the film is centered around talking, it's what these characters don't say until they have to that make the film strong and Greenberg and Chung find the truth in these moments.

An agreeable riff on Richard Linklater's Before Sunrise...

A perceptive film that has the self-awareness to make innocuous fun of the much stereotyped expat experience. ... It's sure to enchant with its lavish display of the city's alluring night lights.

They walk and they talk. And then they walk and talk some. Which is to say that this is a total pedestrian affair.

Both performances are charming, but the unsubstantial screenplay is driven by cutesy coincidences.

I will admit, I am be a sucker for a great romance flick, especially when it is impeccably cast and extremely well-written. While Already Tomorrow in Hong Kong is both of these things, I found myself wanting more throughout the entire film. Following two strangers as they meet in Hong Kong one night, they spend the night walking around the city together, only to have a conflict and bid farewell to one another. One year later, they happen to cross paths once again. Talking about their lives and struggles, they spend another night on the town together to see if they really are right for each other. The premise of this film is right up my alley, but there just isn't enough substance to carry a full film in my opinion. While it is very reminiscent of Richard Linklater's Before Sunrise, Before Sunset, and Before Midnight, I went in with an open mind, hoping that there would be enough differences that set it apart; However, it is eerily similar. Meeting up years later to see if they will fall in love, all while the film takes place throughout one day is pretty much a rip-off, but the characters are completely different. For that reason, it felt more like an homage than a rip-off, which I was able to respect. This was due to the fact that Jamie Chung and Bryan Greenberg shared some pretty great chemistry, but is a film great just on chemistry alone? When a film solely relies on the cast alone to drive the film, it is without question that the two most important aspects of pre-production is in the casting and scripting departments. Yes, this is a very small, independent picture, but there just was not enough substance for me this time. Sure, in Linklater's Before trilogy, audiences follow two people walking through the streets, but the dialogue is much deeper and more though-provoking, while still feeling like real people. Which this dialogue felt real, it was not though-provoking enough to really emote the things it wanted to. By the end of the film, I was left a little short-changed. While I am all for open endings, there should always be some sense of closure to your story. To me, endings that are left to the audiences interpretations are the best, but when you have confused characters who really haven't made up their minds when your film concludes, it can be quite jarring. This is not a spoiler for the film, because there really is nothing to spoil about this film. It is a film about two people who meet, fall apart, meet again, and you never really know what happens. Sure, it is left up to your interpretation, but it felt unfinished in my eyes. In the end, I still felt like I was spending the night with these characters in reality, due to the chemistry shared between these two leads. Although I do think the film could have used another 10-20 minutes (due to the fact that it is only a mere 78 minutes long), I felt like it did its job nicely, creating a sweet, simple story that can be viewed by many as a throwaway film that they may not quite forget. It has enough memorable scenes and leaves you thinking by the time the credits scroll. I see exactly what the filmmakers were going for here, and for that, it is a harmless film overall. I enjoyed myself quite a bit while watching this film, I just felt like it needed a little more substance.