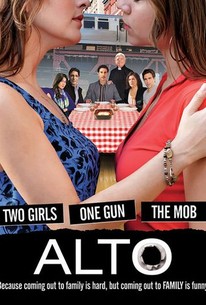 A lesbian mob comedy...enough said? An improbable love, the mob and family traditions gone awry all pave the way to laughter in this character-rich story that explores uncharted territory. When unlikely worlds collide, chaos ensues and it all comes down to: Two girls. One gun. The Mob. Because coming out to family is hard, but coming out to FAMILY is funny.

There are no critic reviews yet for Alto. Keep checking Rotten Tomatoes for updates!

There are no featured reviews for Alto at this time.