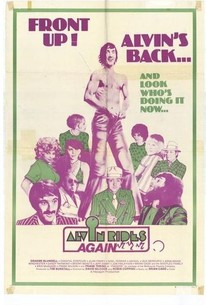 Alvin Purple (Graeme Blundell), the lothario hero of the Australian low-budgeter Alvin Purple (1974), "rides again" in this slapped-together sequel. This time, Alvin has more to contend with than the requisite beautiful girls who find him irresistable. It seems that there's an American gangster around and about, "Balls" McGee (also played by Graeme Blundell), who's the spitting image of our hero. The predictability of the plotline is enlivened by the film's unending stream of vulgar sight gags and scatological dialogue.

Noel Ferrier
as `The Hatchet'

There are no critic reviews yet for Alvin Rides Again. Keep checking Rotten Tomatoes for updates!

The Aussie's original naughty boy in this sex-comedy sequel is quite good as much as I liked the original the best. This was rated "M" and you know the first Alvin Purple was rated "R" with plenty of sex and nudity scenes than this. As the first time I ever seen Abigail in her nudity scene - wow! Graeme Blundell made his comedic performance as the title role on the road trip, drag as one of women's cricket team for the pitch, and assumes his gangster persona. The film ends with a hilarious car chase through Melbourne's tram country that I liked it!