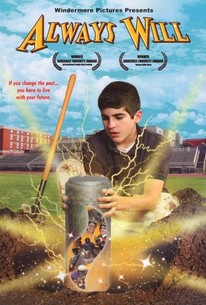 A high-school senior whose life has become a constant stream of disappointment discovers a means of traveling into the past and correcting his mistakes in director Michael Sammaciccia's heartwarming tale of family and friendship. As his final year of high school draws to a close, troubled Will begins to lament the fact that he has drifted apart from his friends and his tyrannical stepfather is making home life miserable. Though his mother has always been there to support him, Will can't help but feeling as if, somewhere along the line, everything just went wrong. One day, after an argument with his stepfather and a particularly disheartening run-in with the school bully, Will stumbles across the grade school time capsule he had made as a young boy. A long-forgotten vessel of treasured memories, the time capsule should, by all accounts, still be buried under the dirt of his old elementary school. Upon reminiscing on the childhood treasures that have been locked away for so many years, Will is suddenly transported back in time to a pivotal moment from his childhood. It was in the fifth grade that the boy who would eventually become his tormentor implored Will to help him through a particularly rough time, and though Will had rejected him back then he now decides to offer his assistance. In the following days, Will begins to see his life take a drastic series of turns for the better, and continues to use his time capsule as a means of correcting the mistakes of his past. As Will breaks the ice with his long time crush and sets about earning back the trust of his childhood friends, however, life at home quickly begins to take a turn for the worst. Now faced with the choice of maintaining his popularity or sacrificing everything for the well-being of his loving mother, Will bravely attempts to reconcile his past while simultaneously salvaging the future and finally taking full responsibility for his actions.

Critic Reviews for Always Will

Always Will is what family entertainment should always be: thought provoking, involving, truthful, rich with wonderful characters.

Audience Reviews for Always Will

There are no featured audience reviews yet. Click the link below to see what others say about Always Will!