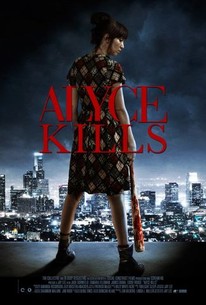 After accidentally knocking her best friend off a roof, Alyce is haunted by guilt and delves into a brutal nightmare wonderland of sex, drugs and violence, her mind tearing itself apart. . . along with anyone else who gets in her way. Director Jay Lee (ZOMBIE STRIPPERS) takes us down the rabbit hole and unleashes enough chaos and horror to satisfy any gore hound. Alyce Kills stars Tamara Feldman (HATCHET, "GOSSIP GIRL"), James Duval (DONNIE DARKO, DOOM GENERATION), Eddie Rouse (PANDORUM, UNDERTOW), Larry Cedar (THE CRAZIES), Yorgo Constantine (FAST FIVE), Megan Gallagher ("MILLENIUM") Rena Owen (ONCE WE WERE WARRIORS), Tracey Walter (REPO MAN, BATMAN), Bret Roberts (MAY, NIGHTSTALKER) and Jade Dornfeld making her film debut as the titular character Alyce. (c) Bloody Disgusting

Brian McGuire
as March
View All

It's ten times better than most horror movies that will hit the multiplex this year. Genre fans will eat it up.

The film is an ultra-violent parody of unearned self-entitlement, of people who feel tricked into a lifestyle they refuse to challenge for the comforts it still offers.

When Alyce kills, she does so with attitude and style, but with a hefty amount of lead-in material, we're left wishing we'd spent more time with Alyce the killer - but appreciate the time we had.

Matt Donato
We Got This Covered
View All Critic Reviews (3)

Even a person with a 3rd grade level understanding of literature can see the connection between. The most obvious of this would the fact that Alyce is best friends with a woman whose name is Carroll Lewis. The author of Alice in Wonderland is Lewis Carroll, so that one was obvious. There are definitely other references to the story riddled throughout the film, so it's obvious the film was greatly influenced by the story. But at the same time, the movie is still very good as a standalone film. You don't need to have read the book to enjoy what's going on here. The movie tells the story of this woman, Alyce, whose struggles with the guilt of having knocked her friend off the roof of the apartment building she lives in causes a downward spiral from which she will, likely, never recover. This is psychological horror for about 85% of it, the rest 15% will satisfy even the most jaded gore hound. And the thing is that the gore isn't really that 'exploitative' like it feels in most horror movies, it makes sense in this movie. It's clear that Alyce is headed down a path that will culminate in violence. The film does a good job at portraying Alyce's guilt through its atmosphere and visual aesthetics. Not to mention, Jade Dornfeld, who made her screen debut in this movie, does a great job at, physically, portraying that guilt while at the same time selling the toll this guilt must be taking on her psyche. This woman pulls off psycho very well. The film is also smartly written with some darkly funny moments. Really, this is a lot better film than I was expecting and it's probably better than most horror films that will hit the theaters this year, so I'd certainly recommend it.